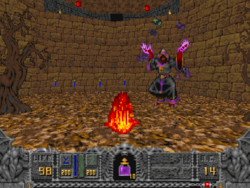 The Heresiarch is attacking the player in Hexen on Hub 3: Heresiarch's Seminary. His invulnerability field is up and he is shooting fireballs at the player. 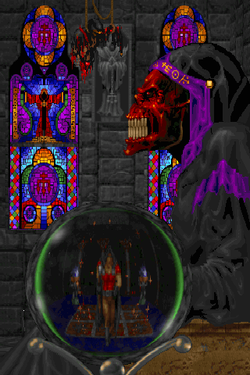 The Heresiarch as he appears at the end of the third episode of Heretic.

The Heresiarch is a boss enemy from Hexen that appears as a large demonic sorcerer with red skin, a tail, and black robes trimmed in gold and violet. Three mana container-like cubes circle his head. He makes a cameo at the end of The Dome of D'Sparil in Heretic and appears as an enemy at the end of two hubs: Heresiarch's Seminary, and Castle of Grief. In Hexen: Deathkings of the Dark Citadel, there is one at the beginning of the Constable's Gate hub and another in Chantry; finally, one appears in Castle of Pain while playing in single-player. He has 5000 hitpoints making him just as tough as Korax himself. The manual describes him as such:

"As far beyond the Bishops as the Bishops are above common men, these blasphemous beings control forces capable of sending mere mortals screaming in terror. The Heresiarch knows several spells, including a strong reflective spell, two types of magical attack, and a summoning spell that gates in Dark Bishops to aid the Heresiarch. Only a superb warrior can defeat a Heresiarch without sustaining serious injury."
― Hexen instruction manual

Baratus (the Fighter) has the highest level of challenge in killing the Heresiarch when compared to the other classes, as he lacks any attack that can damage the Heresiarch while the barrier is up. Parias (the Cleric) can kill the Heresiarch easily with large numbers of gas clouds, using fléchettes. For Daedolon (the Mage), the Sapphire Wand is safe to fire upon the Heresiarch as its shots will not bounce back, although a kill by this method will be quite slow.

When the Heresiarch dies, the cubes will fall to the floor and bounce several times before exploding. The explosions are very powerful and the blast radius is much larger than is apparent from the explosion sprites. Extra danger comes from the fact that a player might mistake the cubes for mana containers.

The Heresiarch incurs splash damage from his own purple missiles. However, the ZDoom source port changes this behavior so that he does not.

The Heresiarch only casts spells when the player is within his line of sight. This includes his shield spell, so it is possible to minimize the amount of time that the Heresiarch's shield is active by the following strategy: when the Heresiarch first enters battle, damage him as much as possible, e. g. with one's relic weapon, which should always be available by the time you face a Heresiarch in stock Hexen/Deathkings. Do not use the Dark Servant, as it might provide the Heresiarch with another target and foil the strategy. As soon as the Heresiarch raises his shield, run and hide nearby but out of his line of sight and count to 30 (this approximates the amount of time it takes the shield to wear off fairly accurately). If the Heresiarch begins to come into view before the shield is down, immediately retreat deeper into hiding. As soon as the count is up, though, rush out and damage the Heresiarch as much as possible once again until he raises his shield, then repeat the process as needed to kill him. With this tactic, it is possible to prevent the otherwise annoying situation where the Heresiarch starts casting a spell just before his shield wears off, choosing the shield spell to immediately restore his shield. As an added bonus, it also lets the player avoid suffering attack from the Heresiarch during his invulnerable period (not counting pursuit by the possessed lava balls).

The Heresiarch uses the cubes to cast his attacks, the Heresiarch himself does not actually fire these, this is why he can still attack when he is in a pain state. If one were to create an actor with these cubes, the cubes would still fire, but the actor would just be doing what it normally does, unless it has the same attack states as the Heresiarch.

Hexen monsters have six byte-sized fields for a special and five args, when the monster is slain the special is run with the given args. (This allows to have simple scripted events such as opening a door when a monster is killed, without having to use ACS.) However, the Heresiarch uses its args to communicate with the cubes, so using them for a normal action special would not be reliable. Instead, when the Heresiarch is killed, it will execute the script with its special number. For example, in Hub 4: Gibbet, the Heresiarch met in single-player mode has a special of 20; when slain, instead of calling action 20 (Floor_LowerByValue), it runs this map's script 20.

In the IWADs the heresiarch is first encountered on these maps per skill level:

The IWADs contain the following numbers of heresiarchs per skill level: