This is the stable version, checked on 30 July 2019. 1 pending change awaits review.

The ambient sounds in Heretic are thing-based as opposed to being script-based like those in Hexen's corresponding system. Briefly, the sound ambience is edited by inserting, deleting or changing specific things in a level.

Heretic stores twelve separate ambient sounds, and their representative things form an own category in the game's collection of things. The functions of the sound things have been hard-coded into the engine, which does set a few limits for the adjustment of ambient sounds, but, on the other hand, makes it relatively quick for one to create and modify a map's sound ambience.

The available sounds are listed below, and the used names are similar to those found in the game's source code. To know which sound entries and names associate, please see the technical information section.

Basically, the sounds can be divided into two classes. The things for waterfall and wind operate differently from the rest as they only produce audio on a limited radius from their center points. These two are notably different from each other as well: the waterfall thing has its sound looping constantly while its wind counterpart plays disjointed audio.

In the stock levels of Heretic, wind things are frequently used in large outdoor areas to play a sound of the wind blowing. Waterfall things are placed in the environments of waterfalls to produce a sound of the liquid flowing. Although there are lava falls in the game as well and they resemble their water counterparts, they do not use the sound effect nor have any other ambient sound enhancing them. 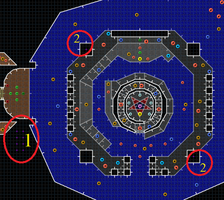 The ambient sounds are circled in E5M5:
1. Global
2. Positioned (wind)

The ten remaining sounds share a common function. Instead of being repeated in a small circle somewhere in a level, they are heard in the entire region regardless of the things' coordinates. Practically, they can be placed anywhere.

When one of the mentioned ten sounds becomes represented by a thing in a level, the sound will subsequently become a part of an automatically looping sequence that controls the playback of ambient sounds. While in the game, the system plays the sound in randomized intervals and volumes. If more sounds from the group of ten are represented as well, randomization is also involved in the selection of the sound.

If the level designer wishes to stress a single type of audio, they would simply add more representative things to make it more likely for that specific sound to be selected. As can be seen in the adjacent picture, E5M5: Hydratyr has eight global ambient sounds set (purple things next to number one). The group includes four things for heart beat but only two things for drops and squish each. Thus, the probabilities for the three sounds to be played are 50, 25 and 25 percent respectively.

A few of Heretic's levels utilize the sounds to enhance the atmosphere of the location, such as E1M6: The Cathedral by having a lot of bell sounds or E2M1: The Crater with its numerous weredragon growl effects. In addition, many levels with water areas tend to have the drops sound. Despite this, the ambient sounds are never used to produce unique in-game effects, which is shown in the fact that none of the sounds are exclusive to a single level or even an episode.

There are twelve different ambient sounds in Heretic, five of which are not present in the shareware episode.