(Redirected from Hexen: Beyond Heretic) 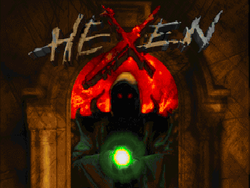 Hexen: Beyond Heretic (or Hexen) is a first-person shooter and fantasy adventure computer game developed by Raven Software, published by id Software, and distributed by GT Interactive beginning on October 30, 1995. It is the sequel to Heretic. The main goal of the game is the destruction of Korax, the second of a trio of demon brothers known as the Serpent Riders, who has taken over the world of Cronos. The first Serpent Rider, D'Sparil, was the final boss of Heretic and the third, Eidolon, would later appear in Hexen II.

Hexen uses a modified version of the Heretic engine. The engine supports network play with up to eight players, the choice of three character classes and retains Heretic's ability to look up and down, and also adds the ability to jump. Hexen also features a "hub" system of maps which allowed the player to travel freely between several levels while preserving their state (monsters killed, puzzles solved, items collected, etc) between visits. In addition, the game features doors and crushers that rotate or move horizontally (rather than vertically), pulsating lights and scripted level events. Ambient sounds are supported but instead of being hard-coded into the engine as in Heretic, they are script-based which allows the level designer to edit their action more freely.

Unlike previous games, which had relied purely on MIDI for music, Hexen can also play tracks from an audio CD. The tracks included on the Hexen CD are recordings of the Hexen music using a Roland Sound Canvas. The entirety of Hexen's soundtrack is not present on the CD, however, and many levels are associated to different songs depending on whether MIDI or Audio CD music is used.

Heretic chronicled the adventures of Corvus, a heroic Sidhe elf who challenged the forces of D'Sparil, the weakest of the three dimension-traveling Serpent Riders. His victory was hardly insignificant, but the other two Serpent Riders were far from idle and continued sowing the seeds of destruction in several other dimensions for a thousand years.[footnotes 1]. One such dimension is Cronos, the world of Hexen: a human world, but one where the forces of magic are both stronger and more strictly controlled than those of the Elven world.

Only three humans escaped the aegis of the leaders' new powers: Baratus, a Fighter of the Legion; Daedolon, a Mage of the Arcanum; and Parias, a Cleric of the Church. Now these three have sworn to destroy the leaders they once followed and anything else that gets in the way as they execute their task. Entering the mystical portal used to invade their world, the three become hopelessly separated, forcing each of them to attempt on their own that which of they had little hope doing together: find Korax's stronghold, defeat his legions of grotesque minions, and finally kill the Serpent Rider himself.

Their task will be a difficult one indeed. It is well-known that Korax's special powers stem from his control of the Chaos Sphere, which he uses to warp and corrupt everyone and everything he touches. Though not the mightiest of the Serpent Riders, Korax is more powerful than D'Sparil was, and his lust for power is matched only by his hatred for all living things not under his control.

Enemies and items are less static than in other Doom engine games, since ACS is used to repopulate the maps and the things placed in a map depend not just on skill, but also on character class. For example, mages, who start with a ranged weapon, will face many more afrits than the fighter and the cleric, but fewer ettins. Certain items, such as the fléchettes and mystic ambit incants, function differently according to class, as well.

Hexen features a fully-functional hub system, which allows the player to move back and forth between maps connected to the same hub as if they were a single large map. Hexen has five hubs:[footnotes 2]

The expansion set Deathkings of the Dark Citadel provides three additional hubs and one hub of deathmatch levels.

Being a sequel to Heretic, Hexen was originally to be called Heretic 2 before Raven made the decision to name it Hexen: Beyond Heretic instead. "Hexen" is the German word for "witches", also meaning "casting a spell" when used as a verb. Moreover, the game has a "warlock" skill level, and warlock is the male version of a witch (called a "Hexenmeister").

The MAPINFO lump contains the names of several levels presumably used during the development of the game. Though the levels themselves are not found in the game's IWAD (with the exception of "Maze" listed above in version 1.0 of the IWAD) the names and MAPINFO data for them (mostly only sky info, but a few have more such as fog and warptrans parameters) still exist. They are as follows:

The DSDA movie run records for Hexen are: