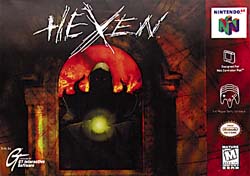 Hexen for the Nintendo 64 is a port of Raven Software's action-fantasy PC game Hexen to the Nintendo 64 released by Software Creations on June 24, 1997. Other console ports were developed by Probe Entertainment for the Sony PlayStation, and by Atod with Probe's assistance for the Sega Saturn.

Of the three console ports, the Nintendo 64 version might be considered the most accurate PC translation, boasting the best graphics and the fastest and most fluid frame rate of the three console ports. Three-sample bilinear texture filtering, as is common with most Nintendo 64 titles, is used to prevent pixelation of monsters and wall textures when seen up close. The Nintendo 64 port also has four-player cooperative and deathmatch options (split screen). However, if multiplayer is used, the game is forced into a low detail mode, lowering the overall graphics quality.

This port does not feature the full-motion video cut scenes added to the PlayStation and Saturn ports. The soundtrack consists of slightly simplified arrangements of the PC's MIDI tracks reworked for the Nintendo 64's internal sound hardware. New narrative introductions to every level are displayed as text on each loading screen to expand upon the game's plot and give each location proper context.

Though arguably the best console port, Hexen for Nintendo 64 was not particularly well received due to overall low quality, compared with extreme disfavor to the standard set by contemporary games such as Goldeneye 007. Unlike Doom 64, there is no use of the hardware's capabilities to enhance the game's appearance beyond the PC version besides texture filtering. The graphics suffer from numerous accuracy and stability issues, with cracks between walls and in the floors and ceilings, and textures warp and shift as the player turns. Controls cannot be rebound and are not mapped in a particularly intuitive manner. Many of the PC game's resources were cut in order to fit on the cartridge. The framerate is relatively poor and notoriously inconsistent, and there are numerous bugs. An entire 123-page Controller Pak is required to save, and saving or loading a game can take a significant amount of time.

The Nintendo 64 port of Hexen is one of the only Doom engine games to receive extensive localization treatment for international releases. The European version of the game, released on or around May 31, 1997, includes full text and redubbed voices for Korax's beginning-of-hub greetings in English, French, and German. The Hexen font has been altered to support diacritics for the latter two languages. As a glaring omission, however, the ACS scripts in this version of the game have not been altered to account for longer spoken lines in French or German, so many get cut off by the start of the next line.

The Japanese version of the game, released on December 18, 1997, includes completely different fonts which allow for a large range of katakana, hiragana, and kanji characters, and voices are again redubbed into Japanese. In this version, the timing is altered in ACS scripts so that the dialogue always plays out fully. However, the game is censored to meet strict media censorship of blood and violent imagery in the wake of the Kobe child murders. Enemy blood is turned a dull shade of green, and decorations that feature impaled or hanging corpses have been modified to remove the actual corpse.[2]

The music frequently starts to stutter and play back with significant noise when the game is saved or loaded. This will usually persist until the game begins playing a new music track.

Normally, the player must stick with one character class throughout a game. However, it is possible to change classes mid-game by exploiting a glitch. It happens by following the guidelines:

You will keep your weapon levels, items, and mana just as before. However, all hub puzzles and conditions will reset, so it is recommended to do this at the start of a new hub. This does not seem to be capable of changing difficulty.