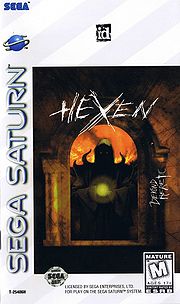 Hexen for the Sega Saturn video game console was developed by Atod with assistance from Probe Entertainment and published by GT Interactive, and was released on April 30, 1997 in the US, along with a version for the Sony PlayStation developed entirely by Probe. Additionally, a Nintendo 64 port would be later released by Software Creations.

The Saturn port features all the levels of the PC version, though some are heavily simplified compared to the original version. The game includes a fairly sophisticated debug mode which even includes a two-player cooperative/deathmatch game mode. While it runs at a considerably higher and smoother frame rate than the PlayStation version, it can still have significant frame drops when too much movement is on-screen.

As in the Sega 32X and Super Nintendo versions of Doom, monster sprites are only ever drawn from a front perspective, lacking rotation graphics. The same is true for the projectile graphics. Gibbing death sequences, which are missing from the PlayStation port, are present here, however. The game requires an official Sega backup cartridge in order to save the game, and takes up 3801 blocks on the cart, which has a little over 7000 blocks in total. While this in theory would allow the cart to contain two saves, because of a programming oversight, only the first one will be read by the game. As a compromise, a password will be given to the player on reaching a new hub.

Both the PlayStation and Saturn versions of Hexen are based on an earlier build of the game as evidenced by some of their shared similarities with the Hexen retail store beta. Additionally, they feature slightly remixed versions of the CD soundtrack from the PC version. Both also add computer-rendered, narrated cutscenes for the game's introduction and between each hub (the latter of which replace the between-hub text screens of the PC original).

The game was additionally released in Brazil, Europe, and Japan. The Japanese release was handled by distributor GameBank and was released on March 26, 1998, almost a full year after the US launch.

On the back of the instruction booklets for Saturn games, there is usually license and trademark information. On the back of the US version of the Hexen booklet, some of the information is missing and instead contains placeholder text, reading, "(Licensor/Distributor trademark, copyright, address and or Sega legal goes here)".

The cover art for all releases matches the PC box art, with differing regional platform-specific trim and icons for ratings and certifications. While the NTSC game disc largely resembles the PC CD-ROM, with a dark brown leather-like background, the PAL CD-ROM is plain white. The Japanese CD-ROM is monochrome, with a black screen print covering the upper three quarters of the disc while the bottom quarter remains unprinted.