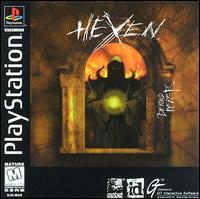 Hexen was released by Probe Entertainment for the Sony PlayStation on May 15, 1997. A port for the Sega Saturn was developed by Atod with assistance from Probe, whereas a Nintendo 64 port was made by Software Creations.

Of all the console ports of Hexen, the PlayStation port has the most limitations and setbacks compared to the PC original; the game is only one-player, the 3D animation/frame rate is much slower and choppier, the more graphic death sequences are removed entirely and, much like the Saturn version, monsters only appear as their front sprites (with the exception of the final boss, Korax, and some projectile sprites). Though all the maps from the PC version are present, the levels' architecture and lighting is heavily simplified compared to the original version. Each save takes up 15 blocks on a PlayStation memory card, the maximum amount allowed, meaning that no other saves can be present on the card. Unlike the Saturn version, no password system is provided.

Both the PlayStation and Saturn versions of Hexen are based off an earlier build of the game as evidenced by some of their shared similarities with the Hexen Retail store beta. Additionally, they feature slightly remixed versions of the CD music of the PC version and add intro and between hub CGI cut scenes, the latter of which replace the between hub text screens of the PC original.

Most of the original music tracks were removed from the port. There are twelve tracks in total, which are reused in all of the levels at least two times: