High/Low 5 is a single-level PWAD for Doom II and a limit removing source port that was released in July 2013. It was designed by Christian Hansen (c-cooper) as the fifth and final entry in his High/Low mini-series, and uses the music track "Death's Bells" from TNT: Evilution. It was recognized as one of the runners-up at the 20th Annual Cacowards. 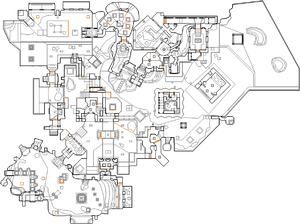 Map of High/Low 5
Letters in italics refer to marked spots on the map. Sector, thing, and linedef numbers in boldface are secrets which count toward the end-of-level tally.

* The vertex count without the effect of node building is 6561.