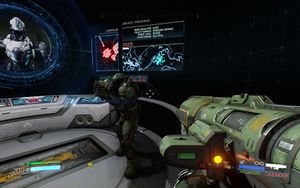 The hologram in the multiplayer equipment menu.

The hologram, also known as the UAC holocaster, is an equipment item in Doom (2016) which is available in single-player and multiplayer modes, with slightly different functionality between the two. It is a small hand-held device which is activated by squeezing its handle and pushing a button on the top of the unit at the same time. Once activated, a holographic projection of the player will be activated for a duration of around ten seconds.

During single-player game play, the hologram is first found in the Argent Energy Tower, just below the top floor. UAC information on the item states that it is based on a late 21st century invention, and functions by projecting an image into a cloud of ionized argon gas. The broad-spectrum image creates a convincing illusion which can distract enemies. In the campaign mode, the hologram's projected image appears like the Doom Slayer, and is armed with a plasma rifle. It will always stand still and, if any enemies are nearby, it will fire the plasma rifle in a steady stream, though no damage is done by the illusory projectiles.

The hologram, like all side-arm equipment items, has unlimited uses and is balanced by a recharge timer. Pick-ups also occur in the environment which will grant an instant charge if the player touches one while the side-arm timer is not filled completely. The pick-up for the hologram is a gray and white metallic case with blue lights on the top and a circular logo in the center which displays a solid icon of a human with a translucent projection of the same form next to it.

In multiplayer, the hologram can be made to run forward in order to create a more convincing illusion for the situation, as standing still during multiplayer matches is unusual. The hologram was available as part of the base game upon its initial release. Since the v6.66 update, the hologram is locked behind player progression, and requires level 29 to be attained for use. As with all side-arm equipment items, it is selected as part of the player loadout.