Holy Hell is a single-level PWAD for Doom II using a limit removing source port, specifically PrBoom or GZDoom. It is a slaughter map that was designed by JK, with an initial release in March 2006 followed by an improved version 1.1 in August 2006.

The main level (MAP05) is actually included four more times with identical (MAP04) or nearly identical (MAP01-03) geometry. Only the number of enemies and resources varies significantly, allowing less powerful computers to run the level. Each level variant also features its own custom music track. A small section of the level is included separately under the HOLYHELL map marker.

Holy Hell Revealed is an expanded and more extreme version of the level that was created by a different mapper in 2016. 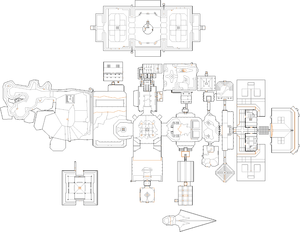 Map of Holy Hell
Letters in italics refer to marked spots on the map. Sector, thing, and linedef numbers in boldface are secrets which count toward the end-of-level tally.

* The vertex count without the effect of node building.

The MAP05 level contains the following numbers of things per skill level: