Holy Hell Revealed is a single-level PWAD for Doom II and the PrBoom+ source port that came out in March 2016. It was created by Serekay as an expanded and even more extreme version of JK's Holy Hell. It uses the music track "BFG Division," originally composed by Mick Gordon for Doom (2016), and a separate download including HD textures is also available. With a total of 41,660 enemies, this slaughter map may have the highest monster count of any map. No demo has ever been submitted to DSDA for it. 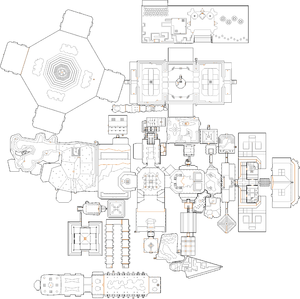 Map of Holy Hell Revealed
Letters in italics refer to marked spots on the map. Sector, thing, and linedef numbers in boldface are secrets which count toward the end-of-level tally.

* The vertex count without the effect of node building is 18412.