Hospoda is a single level PWAD for Doom II created by Adam Bilbrough (Gibbon) in May 2022. The level was done as an exercise in speedmapping and distinguishes itself with a unique theme: that of a Czech Hospoda - a local pub. It makes use of custom textures to make the atmosphere authentic. The soundtrack is a digital version of the Czech national anthem.

In theme with the humorous setting, the story posted in the release thread is tongue-in-cheek: "So after kicking all that Demon butt, Doomguy finally wanted some decent Beer and he was only gonna find it in the Czech Republic, so he grabbed his ticket and dove into a Hospoda. Those Demons had the same idea and had already ordered their food before he got there... how rude! Time to give them some dessert."

The level ends with a UMAPINFO text screen that states: "You wanted a break, and some Gulas! But those demons yet again ruined your plans! Your ticket home is near, your belly rumbles and your throat thirsts. When will you get that Czech beer... You look around and smell the air, time to hit another joint! Ty Vole..." 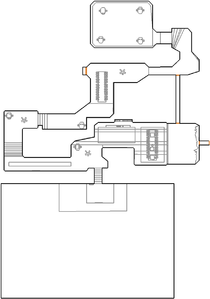 Map of Hospoda
Letters in italics refer to marked spots on the map. Sector, thing, and linedef numbers in boldface are secrets which count toward the end-of-level tally.

First grab the super shotgun and run through the hallway to grab the box of shells. A shotgunner will wake up when you get the ammo, so prioritize him. Shooting will wake up the pink demons, so make sure to keep space between yourself and them. They can swarm you very easily. When you have dispatched the horde, turn right and tackle the imp swarm. Getting them to infight with the Hell knight is ideal, as shotgun shells may be running low. There is a chainsaw and health and armor bonuses around as well, make sure to use them if ammo and health are dwindling.

Now go back through the hallway with the pinkies and pick up the box of shells. You will now have enough ammo to clear the mancubus and kill the Hell knights up ahead. Continue onward and be careful around the shotgunner room. Getting them infight is easy, so they are not much of a threat. Killing the shotgunners will wake up the chaingunners further ahead; kill them and continue on to find a plasma rifle. You will pass the blue door on the way to get it. To get the blue key, head up the stairs and use the plasma to kill the arch-vile. This will allow you to dispatch the cacodemons with ease. The blue key is sitting on a table in this outdoor dining area. Walk back to the blue door and go through it. There is a rocket launcher you can use to kill the arachnotrons. The exit is waiting at the end of the room.

In sector 5, multiple shotgunners are stuck in place due to being placed too close to each other.

* The vertex count without the effect of node building is 2115.