Brackenwood is one of the offshoot maps accessible from Blight in the first hub of Deathkings of the Dark Citadel. The map includes multiple death wyverns, and is the only map in Deathkings to use this enemy. Killing the wyverns is not necessary to complete the map. 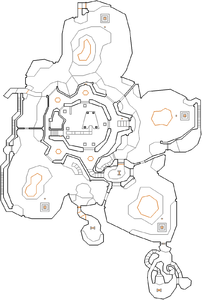 Map of Brackenwood
Letters in italics refer to marked spots on the map. Sector numbers in boldface are secrets.

Pressing the switch lowers stairs over at the east side of the tower that lead outside. It also unblocks access to the aforementioned passage. If you are playing as the fighter, you may to try to carefully jump across the raised platforms to get your third weapon at this point. It will become much easier to get later in the map, though.

Travel to the east side of the tower and note the symbol on the podium to the left of the stairs before you head outside.

You must travel around each quarter setting the symbol on each pedestal (in a preset order, you can't choose which order you do them in) to the same one as is on the podium by the stairs back into the tower and then press each pedestals switch to set them. All the while dodging wyvern breath.

Note that the symbol changes for the second and forth pedestals (the third will be the same as the first), so you'll have to return to the podium by the stairs to get the new symbol.

Once you have set the correct symbol on all four pedestals. The switch on the inside west side of the tower becomes functional. Pressing it will transform the statues in the middle into chaos serpents and a Dark Servant. It will also spawn a magic bridge leading up to the planet from the middle platform. Defeat the serpents and jump on the magic bridge to get the map’s planet, which you should take back to Blight.

The south has an exit to Sump. You can get a fire mask early, but you need to have already flipped two switches in the other map before this portal connects to the main area.

The south east corner is an exit to Badlands. You can use this portal to bypass a puzzle on that map where you normally need to uncover and ring a bell.

Various locations on the perimeter of the map are closed until you defeat the corresponding death wyvern. They contain a few powerful items, but tend to have Dark bishops guarding them as well.