Bright Crucible is the secret level of the first hub in Hexen. It is only accessible after the optional puzzle is solved at the end of the hub. It is entered through the portcullis within the stone pillars on the Seven Portals.

Other horsemen have attempted to conquer worlds only to be defeated. Here in deadly radiance lies the heart of D’Sparil, first of the serpent riders to fall in battle.

Map of Bright Crucible
Letters in italics refer to marked spots on the map. Sector, thing, and linedef numbers in boldface are secrets.

You may find this level difficult, as it presents an unfamiliar challenge - a wide open arena full of monsters, namely chaos serpents. Most of these are brown chaos serpents, a new variety which is otherwise very similar to green chaos serpents. The fighter's lack of ranged weapons is a disadvantage here, but with strategic play he can persevere. The puzzle to be solved is fairly straightforward. You will also find all four armor pieces here, one on each ledge.

The wings of wrath are highly advantageous, as they allow you to fly around the arena and pelt the swarms of enemies with ease. They also give you greater mobility overall. However, that does not mean you can cheat the puzzle. While you can fly to the southern ledges by the heart chambers, you will find that you cannot progress. In the west, the gemstone is sealed inside of a hollow pillar. And in the east, the chamber is barred by a pane of stained glass, which is unbreakable until the puzzle is solved.

You begin amidst a set of thick pillars. On either side of you, afrits awaken - dealing with them is your first objective. There are crystal vials and blue mana to collect, as well as a disc of repulsion on the southern ledge between the pillars. Once you have cleared the area, you should take a look around and get your bearings. You are on high ground overlooking a large, open arena. Numerous brown chaos serpents are shooting their green fireballs at you. Rivers flow across the banks and empty into a central lake of sludge on the low ground, all of which is infested by stalkers - another new monster to contend with. From here, you should make your way to the western bank (to the right of your starting position), and onto the elevator up the northwestern ledge.

However, this is easier said than done, as there is a swarm of brown chaos serpents and ettins guarding this area. It is possible to avoid them, but it is better to go through with fighting them so that they cannot cause trouble later. In general, the best strategy is to keep moving and attack with ranged weapons from a distance. The river gives you more room to maneuver, but make sure to dispatch the stalkers. Trees are useful for cover. You should not hesitate to use quartz flasks when needed, as there are plenty to be found. If you are the fighter, you will find that fléchettes are much too inefficient - a better strategy is to do hit-and-run maneuvers against the brown chaos serpents with Timon's Axe. Other classes will benefit from the judicious placement of fléchettes. Once the area is cleared, there are quartz flasks and blue mana scattered around, as well as fléchettes hidden in the recessed corner by the northwestern ledge, guarded by another brown chaos serpent.

After this, you will get on the northwestern elevator. Once you reach the top of the ledge, you will fight a green chaos serpent and pick up an amulet of warding. Inside, you will descend into a corridor, in which side-rooms open to unleash centaurs. These alcoves also contain crystal vials, and there is blue mana along the path. At the end of the corridor, you will find the heart chamber. Atop the central dais is a red gemstone - it is the Heart of D'Sparil, final boss of Heretic. At each corner, a demon statue spews fireballs around the room (which is the source of all the noise). Run through and seize the heart gem, and the fireballs will stop. The stairs lead up to the southwestern ledge, where you will find one or two green chaos serpents and a platinum helm.

From the eastern side of the open arena, fireballs come sallying forth. This is where you need to be. There are two different paths - across the muck, or around the rim. If you drop down to the swampy low ground, you can go directly across and take an elevator up. However, there will be stalkers to contend with, and you may end up in the middle of the crowd when the elevator rises. I would recommend going around the rim - head south along the perimeter of the level until you come to a fissure, which you can jump across. There are also crystal vials here. Follow the wall along the eastern bank, and you will reach a strategic chokepoint. The land is narrow here, and a tree stands between you and the swarm of brown chaos serpents. This tree is of great tactical value. By standing behind it, you are covered from their fireballs, while drawing them near, and you can attack through the tree. The fighter is able to mow down the crowd using this strategy. The mage and cleric can also use this tactic -- they will have to aim carefully to shoot through the tree, but it is still feasible.

As this level is symmetrical, you will again find blue mana and quartz flasks scattered about. There is another cache of fléchettes in the niche by the northeastern ledge. The next step is also similar. You will take the elevator up the ledge to a green chaos serpent and mesh armor. You descend into another corridor, this time with ettins pouring out of the alcoves. You may want to switch to your first weapon to conserve mana. In addition to crystal vials and blue mana, there are also fléchettes in the alcoves. At the end of the corridor is another heart chamber, this time guarded by stained glass windows. These magical panes of glass act strangely. First, fireballs from the green chaos serpents on the far side can go through. Secondly, while the first pane shatters normally, the second cannot be broken until the puzzle is solved. Thirdly, if you are the mage, you may find it difficult to break the panes as your shots pass through them; a blast of frost shards front and center should do the trick. Again, run to the center of the room where there is a golden-crowned pedestal. You must select the heart of D'Sparil from your inventory to place it there. Once this is done, you have solved the puzzle. Simply break the next stained glass window to open the path and deal with those green chaos serpents. If you lure them down, you can exploit the architecture to easily dispatch them from the side. You come out on the southeastern escarpment, where you can pick up a falcon shield to complete your armor.

Now that the puzzle is solved, a large flight of stairs has arisen through the center of the level. Make your way to the swampy low ground, be wary of the stalkers there, and climb up. The stairs will bring you to the starting area with thick pillars. Keep moving forward and go behind the northernmost pillar, and you will find another flight of stairs tunneled through the wall. These lead up to a new and separate area - a pillared forum, full of ettins and green chaos serpents. You can use the architecture here to your advantage - by running around and using pillars for cover, you should be able to clear the area without too much difficulty. There are many containers of blue mana and quartz flasks strewn around, and in the central rotunda you will find an icon of the defender (on mid to high difficulty settings). It should be noted that you are required to visit this area in order to progress.

Having solved the puzzle and reaped your rewards, it is time to find the way out. Head back down the stairs to the muck lake, and keep going south into the fissure. The muck descends in a waterfall, but you can easily walk down the starry magic stairs. There are more stalkers to deal with down here. Follow the flow of the slime river, and you will find an opened grotto with a portal inside. As you enter the mouth of the grotto, you cross a linedef which is the first of two triggers needed to open the secret portal from Forsaken Outpost to Desolate Garden on a later hub. For now, go through the portal to return to the Seven Portals. 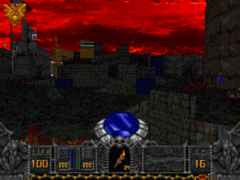 A Hall of mirrors effect occurring due to a drawsegs overflow after the stairs have formed.

It is possible to trigger a visplane overflow by standing in an area slightly north of the southwest corner of the main area and looking out across the swamp, despite Hexen's raised visplane limit.

Additionally, after the stairs have formed in the middle of the map, a drawsegs overflow will occur if the player views the area from the southwest corner of the main area, resulting in graphical glitches.

The first stained glass window in the second heart chamber can be "shattered" after it is already broken.

The data was last verified in its entirety on December 3, 2021.