Catacomb is one of the four offshoot maps reached via Blight in the first hub of Deathkings of the Dark Citadel. It is one of the few maps in which wendigos are encountered. 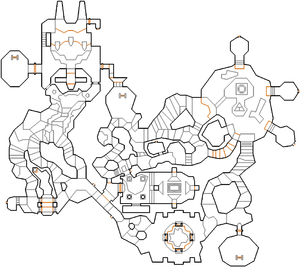 Map of Catacomb
Letters in italics refer to marked spots on the map. Sector numbers in boldface are secrets.

You begin this map staring at some caves and some wendigos.

Once they have been shattered, take the right cave and then turn left at the next two intersections to enter an underground stream. Part way down this stream on the left is a small opening. Inside you will find the second part of your fourth weapon if you are playing as the Cleric (the only time you can find this on this hub) and a switch. Pressing this opens a pair of doors, one further downstream, which leads to the maps planet gem and another which allows you to pick up an item needed to get the gem.

Continue traveling down the steam making a sharp right when it drops into a chasm. Here is said door. Travel up the stairs where you will find said gem suspended above a chasm.

However jumping across the chasm to try to pick up the gem will at this stage result in you being teleported back to the start of the map. You need to collect four Fire Masks dotted around this map. Three are in areas beyond this room, while one is back the way you came.

Starting with the one further back, return to the start and this time take the left cave and immediately take another left up the stairs. You will be looking out over the chasm the stream plunged into. In the middle of the chasm on a raised platform is one of the Fire Masks. You need to jump across to reach it. However, if you approach the edge and wait for a moment, a small bridge will raise up making it easier.

Once on the Fire Mask platform, you will see three small shuddering platforms that lead to three doors. You must press a switch behind each door to raise the barrier around the mask. Though beware of the chaos serpents behind each one. Note that two of the serpents behind one of them are stuck together and hence unable to move (on skill 3 or higher). If you are playing as a Mage, you will also find your third weapon on the southern most point of this platform.

Fire Mask in hand, return to the room the gem is in and continue past it (though of course, you can place the mask you already have it, if you wish) to find a three stage lift.

Travel up to the top floor and through the door to be presented with a crypt. On your left is a pair of broken pillars. Jump up them and press the switch at the top to make the second Fire Mask accessible on top of the coffin.

The other two Fire Masks are both collected from the bottom level of the multi-stage lift. Down which lurk numerous wendigos. Head left to find a small wooden structure and a switch. Pressing the switch makes the middle of the structure descend at speed. When it reaches the bottom, you will be facing a small cave. Inside is the third Fire Mask and a teleporter that takes you back to the start of the map.

Once you are back at the bottom of the multi-stage lift, head right this time where you will come to a large lave fall and a bunch of afrits. To the left side of the lava is a narrow set of stairs that take you to the upper level of the lava fall. Run across the line of boulders to avoid getting burnt. Behind the door on the other side is a switch.

Pressing this switch will raise the grate at the bottom of the lava fall. Head down it but make a quick right to avoid being swept to your death. Inside this alcove is the forth Fire Mask.

Return to the gem and place all the remaining Fire Masks into their respective slots. You can now jump the chasm to grab the map's planet and then return to Blight.

The southeast exit to Sump gives early access to a flame mask, but the main section is locked until one of the switches is pulled.

The northwest exit to Badlands is simply an alternate entrance.