Pyre is the first hub's secret map in Deathkings of the Dark Citadel. It can be opened from Blight and accessed from the Ruined Village. 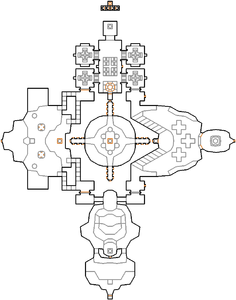 Map of Pyre
Letters in italics refer to marked spots on the map. Sector numbers in boldface are secrets.

You begin Pyre in one of four alcoves in a black room surrounding a raised platform in a pool of lava. There are switches down each alcove. Once all four are pressed, small lifts on the raised platform will be activated. On top of the platform is a teleporter that will take you to the rest of the level.

The rest of Pyre consists of four linked areas. Which one you start in depends on which side you enter the teleporter from.

The objective here is to press three switches. Two of which are by the doors leading to the north and south rooms. To reach the third switch you have to press the face switch on the wall behind the teleporter exit. This will lower a wall at the other end of the room, which contains a Mystic Urn and the third switch that will briefly open the aforementioned doors for a few seconds.

A battle against a large group of dark bishops. Simply press the switch at the back of the room to open the doors to the east and west rooms for a few seconds.

You'll also note the exit portal in a room behind this one. But you can't access it until completing all four rooms.

You'll start on a ledge overlooking a large river of lava. On either side of the ledge are stairs leading down to the lava. on the other side of the lava is a switch. This will open the doors to the north and south rooms for a few seconds. You must press it and run across the lava, up the stairs and through either door before it closes.

Completion of All Four Rooms[edit]

Once you have completed all four rooms, a small lift up to the ledge the exit portal is on will activate. On this ledge you will find the third segment of your fourth weapon regardless of which class you are playing. These are the only third segments of the fourth weapon on the hub.

Entering this portal will return you to the start of Ruined Village, right in front of the portal to Blight.

It is possible for a visplane overflow to occur if the player looks down the hall at certain angles when standing near the swirling lava pool that contains an Icon of the Defender.

* The vertex count without the effect of node building is 1271.