Ruined Village is the first level of the first hub of Deathkings of the Dark Citadel; Blight. 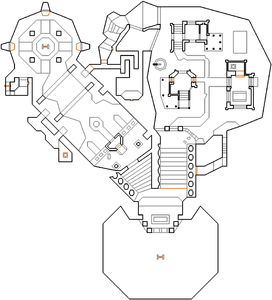 Map of Ruined Village
Letters in italics refer to marked spots on the map. Sector numbers in boldface are secrets.

HeXen Deathkings begins in the remains of the villages church. Immediately several ettins are alerted to your presence and several afrits hide behind the pillars nearby as well.

If you walk on to any of the glowing platforms, the walls behind them all will lower. All contain an ettin. But the one closest to where you start also contains your second weapon.

Note the Rusted Key door approximately in front of you and head toward the other end of the church and jump over the crumbled pillars, which several chaos serpents are using as a barricade. Then find the raised part of the floor behind the central support to open a hidden door. Inside is a switch which opens the wall behind you revealing stairs and more foes.

Travel up the stairs past an altar. If you look out the windows behind the altar you will see a portal.

As you travel up the stairs, several chaos serpents will teleport in. At the top of the stairs, the entrance to the church is barred, but fortunately part of the wall next to it has collapsed that you can get through.

You can also turn around and travel behind the pillars on the left side of the stairs to pick up a few crystal vials. Along the wall behind the pillars is a griffin mural. This is a secret door that can be opened. The passageway behind it leads up to a small ledge, on which you can find the third piece of your fourth weapon. For the fighter and mage, these are the only place on the hub that you can find these segments of your fourth weapon.

Either way, you are now in the village itself.

Travel to the top left area of the village, where there is a waterfall blocked by some destructible trees. Break through them.

Behind the waterfall, you will have a choice of left or right. Right leads to a drop off that deposits you back in the church at the cost of a little health. Head left down the narrow corridor where there is another switch. Pressing it will lower a couple of the border pillars on the right side of the church. Return to the church either down the stairs or the aforementioned drop off.

Inside this newly opened area is a teleport, which will take you to behind the fireplace in the south east building of the village. Press on the back of the fireplace to lower it (the different texture). When you are raised into the building proper, you will find the Rusted Key on the table amongst some clutter. Picking it up will open the doors to the outside.

Return to the Rusted Key door and open it to be able to travel up to the small room with a window that you could see from the start location. Inside is a switch, which raises the large central pillar just outside the window. This reveals several afrits and also the portal to Blight, the central level of the hub. After leaving, the map can only be revisited if the player finds and places a hidden gem on the Blight map. However, if the gem is placed, the player can return here as many times as he pleases by pressing use on the segment of the mosaic containing the gem.

The data was last verified in its entirety on December 3, 2021.