Sump is one of the offshoot maps from Blight in the first hub of Deathkings of the Dark Citadel. It uses the FOGMAP fade table, the only map in the single-player Deathkings campaign to do so (the multiplayer-only map Deathfog also uses FOGMAP). 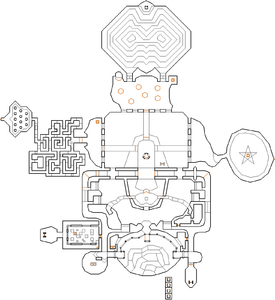 Map of Sump
Letters in italics refer to marked spots on the map. Sector numbers in boldface are secrets.

Here in this swamp map you must collect three Fire Masks and then press three switches in areas each Fire Mask allows you to activate, in order to claim the maps planet gem.

Note the pillar you place the Fire Masks in to your left when you start and the three slime rivers.

You must collect the Fire Masks in a specific order. However you can place each one in any of the three slots and hence press the three switches in any order. Hence the layout of this article.

There is an entrance south of the structure leading to a mountain of slime and stalkers. The first Fire Mask is on top of it. Naturally, you have to jump into the slime around the mountain and then climb it.

Once you have pressed the switch at the end of the area beyond the slime river you lowered with the first mask, the previously locked door to the left of the slime mountain, where you found the first mask, will open. Behind it is a long passage way that snakes around to the back of left Fire Mask containing cage. Though watch out for the moving pillars as they will crush you if you get caught in between them. On the way down the passage, you'll also be able to jump onto the backs of the left slaughtaur carrying moving platforms. Fighters will be able to find the second segment of their forth weapon on one of these.

Once you have pressed the switches at the end of two of the areas beyond the slime rivers you lowered with the first and second masks, the locked door on the right of the slime river will open revealing a passage way similar to the one that led to Fire Mask 2. Again watch out for the moving pillars on this side and also the crusher right in front of the Fire Mask. Once you pick up this Fire Mask, a pen revealing a few slaughtaurs will open further back down the passage. Though inside the pen is a teleporter that will take you to a small room containing an Icon of the Defender.

Note that the Cleric's third weapon is available down this river, so Cleric players may wish to lower this one first.

After jumping down and dealing with all the stalkers lurking around. Note the teleporter in the top right, which will return you back to the start area.

Enter one of the two openings at the other end of the pool to enter a circular corridor. However rather than go all the way around it, you want to turn toward the other opening where you will find a chaos serpent. Slay it and a wall around the inner side of the corridor will lower unleashing several bad guys and also another chaos serpent. Slay this one and another wall will lower around the inner side of the corridor. Repeat this several times and the entire center will have lowered turning the area into a large open room. Though you may want to circle around the corridor each time to pick off the other bad guys before slaying each serpent.

When you slay one of the serpents lowered on the final lowering wall, another wall will lower at the back of the room, containing the switch, which will open the passage to the next Fire Mask and also lower the pillars of slime back outside, unleashing more chaos serpents. Your only aim now is to get to the aforementioned teleporter.

Jump down and deal with the Stalkers. This is the only river where an exit teleporter isn't provided until you press the switch.

Fortunately this is a quick switch to reach. Enter the circular room behind the pool and follow the walkway around to the other side, making sure not to fall in the lava, as at this stage there is no way out, to find the switch. Pressing it will open the passage to the next Fire Mask and lower the star in the middle of the lava pool, in the middle of which is the teleport that will take you back to the start of the map.

Kill the stalkers down in the pool and enter the narrow passage over the other side of the pool to enter a maze of moving slime platforms, bottomless pits and of course more than a few stalkers.

There isn't really much guidance to give here except to note that you must work your way toward the north west corner of the maze. Though you might want to travel the south east and west sides of the maze to find a few Quartz Flasks and a Mystic Urn respectively.

Once you reach the north west corner of the maze you will come across a small room with several steel pillars and more Stalkers. The switch is at the far end of this room. Once you've pressed the switch, you have to work your way back out of the maze to the teleported you passed at the start. This will take you back to the start of the map.

You've pressed all three switches. Turnaround from the start to see it sitting on a small pedestal in the middle of a pool of slime, that the three switches raised. Simply pick it up and you've got the map's gem. Return to Blight.

The cave key gives access to Catacomb in the south-east. This serves as an alternate entrance.

The emerald key gives access to Brackenwood. Only the outer ring can be used until you open up the main section through the regular entrance.

* The vertex count without the effect of node building is 1586.