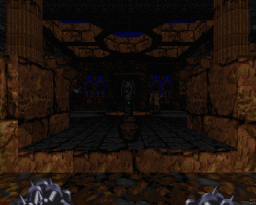 The first thing the player sees in Hexen

The Winnowing Hall is the first level in Hexen. It was designed by Brian Raffel.[1] It serves as a prologue and a tutorial. Although it is part of the Seven Portals hub, you cannot return to it once you have left.

Among the first places set upon by Korax's minions, the chapels bell sounds as a death knell for the doom about to befall the rest of Hexen.

Map of Winnowing Hall
Letters in italics refer to marked spots on the map. Sector, thing, and linedef numbers in boldface are secrets.

You start off in front of a chapel. Entering the door, you'll find yourself in a large room with a barred teleporter. Beware of the two traps here. The Korax icons along the south wall will activate if you get near, shooting fireballs for several seconds. If you step on the central platform where the teleporter is, the four surrounding chambers open to unleash ettins.

There are many stained glass windows in the chapel, some of which conceal items. In the western alcove, you can smash the righthand window to reveal a hidden stairway. At the bottom, you'll find an ettin or two, health, and a bullhead switch - pressing this will open the gates. Behind the next door is a narrow area where walls will lower to surround you with ettins. Near the stained glass windows on the far end of the room is another bullhead switch - pull it to lower the pillar with the emerald key. As soon as you take it, the gates start opening and closing. They can crush you if you're not careful, so your best bet is to dash through.

Now that you have the Emerald Key, you can open the locked gate outside. To find it, leave the chapel veranda and turn left. Once it's unlocked, you'll be confronted with more ettins. Near the second wooden gate is a sun/moon switch - press it to open the stone door on the right. The stairs lead up to a rampart with more ettins, and another sun/moon switch that rises up. Press this to open the second gate. Before you head back down, you can climb up the southern wall for a platinum helm.

The second gate opens to a courtyard with a belfry, more ettins, and afrits. The belfry is locked, so you'll have to enter the cave, located to the west and covered by trees. There may be more ettins here if you haven't killed them already. The path will lead you straight to the silver key. Once you take it, the crushers in the cave activate - they grind open and shut at varying speeds, so proceed with caution. With the silver key you can open the door to the belfry and climb up. Hit the bell to ring it, which solves the puzzle. You can either climb back down, or jump down using the ledges with statues (done properly, you won't take fall damage). You can either go back the way you came in, or through the cave if the crushers have stopped (the stalagmite barrier will have disappeared). Back at the chapel, there will be more enemies, including afrits. You'll find that the teleporter inside is now unbarred, and it sends you to a room with a portal. A passage opens to the right, giving you one more chance to explore the level, as there is no way to return. Enter the red portal to proceed to the Seven Portals. 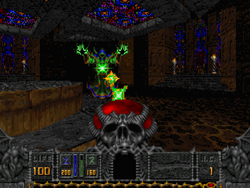 A pre-release screenshot from two months before the game's release reveals that this level previously had dark bishops present as enemies. This might either indicate that the level originally occurred much later in the game's progression (possibly as part of the third hub where dark bishops normally occur), or that dark bishops originally occurred as early as the first level of the game. In addition, the architecture differs in the center of the room from what is present in the final level.