Armory is the secret map of the second hub in Deathkings of the Dark Citadel and can be opened and accessed from Treasury. 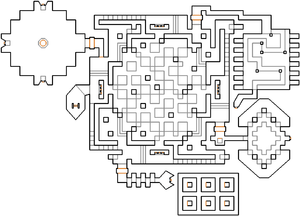 Map of Armory
Letters in italics refer to marked spots on the map. Sector numbers in boldface are secrets.

Initially, this may seem like a very confusing map with a never-ending stream of monsters and a maze-like central area, but once you understand how it works, it's pretty simple.

The center of the map is essentially a giant square full of cages with routes between them, some of which are blocked by steel barriers at any one time. Each possible route leads from one of the sides of the square to another. At the sides of the square are stairs leading to the side areas, each of which has a trap or puzzle to defeat and a moon switch. Once you press all four of these switches, the exit portal back to Treasury becomes accessible on the side you started the map on (the west side). You can tell when one of the challenges is complete as the maulotaur brazier in that area will be lit. A piece of armor will also be revealed near the brazier; completing the entire Armory will give you a full set of armor (minus whatever was lost to damage in the process).

Only one route through the central maze can be open at once; at each side of the map is a bank of three face switches controlling the barriers. The left switch will close whatever route was previously open and open a route through the cages to the side of the square to your left. The middle switch will do the same except open a route to the side opposite you, and the right switch will likewise open the way to the side of the square on your right. A methodical approach will therefore allow the player to tackle the level most efficiently; the simplest solution is to choose a single direction and stick with it, never going across. Other efficient solutions are possible, however.

Pressing one of the face switches also teleports bad guys into many of the cages as long as the cage isn't already occupied. The first time you open a route will also unleash several Dark Bishops. Hence it may be advantageous to try to run through the maze rather than fight and also to make as few uses of the face switches as possible.

You can find Wings of Wrath in the middle of the maze.

You start on this side of the square, so you can tackle it before you press any of the face switches. The exit portal will also be revealed behind where you start once you complete all the puzzles.

Go up the stairs to your right and through the door where the switch sits down the end of a short corridor. Pressing the switch will turn the corridor into a series of sliding walls that will crush you if you get caught in one. Timing your escape for when the pattern is moving away from you is safest.

Up the stairs again and through a door you will find a metal pillar blocking your way. Brush against it to make it lower and open the way to a small room with the switch at the end.

Pressing the switch opens pens in the room containing a bunch of dark bishops and also a fair bit of mana.

This time, heading up the stairs and through the door will bring you to a walkway that winds over a pool of lava. At the end of this walkway is the switch. However, chaos serpents in alcoves along the sides of the room will send a hail of fire your way while you traverse the path. Many of these alcoves also contain artifacts that you can get by jumping or flying into them from the walkway, but you will generally have to deal with the resident serpent first.

Using the wings of wrath will make this room much simpler to tackle, as you no longer have to worry about falling from the walkway.

Up the stairs and through the door you are presented with a room of afrits. Though they will more than likely be nearly if not completely destroyed by the ripper ball shooter in the center of the room that sprays rippers in a rotating pattern around the room.

Your objective is to press the three switches that function as this side's "switch" while staying ahead of the "spray". If you have a spare Icon of the Defender it may be handy here.

* The vertex count without the effect of node building is 1009.