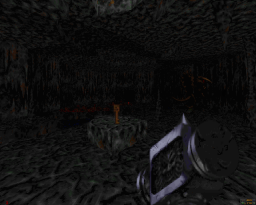 The Cave Key on the Caves of Circe

Caves of Circe is a map in the second hub of Hexen, Shadow Wood. The player must collect the Cave key from this map, and find two puzzle switches that require keys from other maps.

Countless travelers have lost their way in the caverns, never to be heard from again. To find the key, the caves must be explored and the dangers faced.

Map of Caves of Circe
Letters in italics refer to marked spots on the map. Sector, thing, and linedef numbers in boldface are secrets.

You begin on uneven, craggy terrain just outside the caves. Surrounding you are brown chaos serpents, which are found throughout the map. To the north of your starting point is a portal leading back to Shadow Wood. Behind that portal is a combined mana container. To the southwest, there is a cache of fléchettes guarded by a brown chaos serpent. To the southeast is the mouth of the caves. You will see a hollow in the cliffside full of stalactites, with bats flying out. Here you can drop down into the cavern. Immediately you are surrounded by ettins, with an afrit in the distance. At the top of the steps, to the northeast, is green mana. There are three passages to choose from.

The Caves of Circe are disorienting. They consist of numerous chambers and snaking passageways, all of which look similar. There are hidden entrances and a couple of huge chasms. In fact, you will probably find yourself utilizing the map function to find your way around. As you go spelunking through the level, you will encounter more ettins, afrits, and crowds of brown chaos serpents. There are also crystal vials and mana to be found on the raised shelves. As you venture deeper, you will hear banging/slamming sounds, but just try to ignore it. You will also notice ascending stairways that are dead ends. These "dead ends" are in fact barriers to the central chamber where the Cave key is located. You will have to find another way in.

For the most direct route to the Cave key, turn towards the lefthand passage, southeast of the entrance. Before you pass under the rift in the ceiling, turn right/west into an alcove. Inside is a brown chaos serpent and crystal vials on the shelf. More importantly, at the southwest corner of the room, below and to the left of the crystal vials, is an opening in the floor. It is very easy to overlook this inconspicuous gap, but this is the way forward. Fall into the chute, and you will safely arrive in a sealed lower chamber with mana and Mesh Armor. Step into the water, and the righthand wall opens, leading back to where the middle passage is crossed by the stream. The "dead end" barriers have now opened, allowing you to enter the Cave key chamber. The most convenient path is to turn right/north, and then left/west at the next fork - this will bring you directly to the central chamber.

Within is a large crowd of brown chaos serpents - try not to get surrounded. Keep in mind that the terrain can be used to your advantage. Once they are defeated, you should look around. The Cave key is in the middle of the chamber, perched on a podium of rock underneath a skylight. Next to it, a subterranean river flows through the chamber (which connects to the stream and the waterfalls of the inner chasm). There are stalactites and stalagmites all around. There should be four passages leading from this chamber, as well as a chute (at the western end) that will bring you down to the lowest chamber in the southern portion of the map. Of the five exits, all but one are descending. The ascending passage is to the west (near the chute), and it leads to a new area. It opens after you have defeated three (3) brown chaos serpents in the central chamber.

You are now faced with a choice. If you have the Horn and/or Swamp keys, you can seek out their respective puzzle switches. You may also wish to explore the caves for more items. If you are heading back to Shadow Wood, you will have to cross the outer chasm to the north. Most of these interests can be served by taking the ascending passage to the high chamber. For exploration and items, see the Secrets section. For the Puzzle switches, see the relevant sections. For escaping the caves, see either Puzzle switches or the section: Returning to Shadow Wood.

At the top of the ascending passageway, there are more brown chaos serpents to fight, along with ettins and an afrit. Once the crowd is cleared, you can take stock of this new area. Instead of cave walls, it is constructed of hewn stone blocks. To the northwest is a platinum helm, but beware, it is bait for a trap. If you approach, you will see the ceiling lurch dangerously. If you make the mistake of grabbing the helm, you will be crushed. It is possible to take the helm by using an icon of the defender, but it is not worth it. Left of the trap, westward, is an alcove full of mana and quartz flasks which is perfectly safe. To the east, next to the entrance, is a ledge overlooking the inner chasm. To the south, there is a swiftly flowing river which becomes a waterfall, leading down to the lowest chamber. Adjacent to the mouth of this river, to the right/west, is the Swamp Door - for more information on this, see the Swamp puzzle switch section. To the northeast is a rising tunnel leading onward. The tunnel is full of crystal vials, bats, and an afrit. Further up the stairs on the right, there is another ledge overlooking the inner chasm (see Secrets for more info). If you climb to the top of the stairs, you will fall down a chute. This leads to the chamber bordering the outer chasm, at the end of the righthand passage from the beginning. For more information on the outer chasm and the way back to Shadow Wood, see: Returning to Shadow Wood.

This puzzle switch requires the Swamp key, which can be found on Darkmere.

You must first go to the high chamber - if you have not gotten there yet, refer to the relevant section. At the mouth of the swiftly flowing river, to the right/west, you will find the Swamp Door. It is recognizable by the Swamp Icon emblazoned upon it. Inside, you will climb up a slimy staircase, which comes to a fork. Turning left/south down the descending stairs will bring you to a dimly lit chamber, filled with ettins and a few mana containers. Most importantly the puzzle switch is down here, set into the wall just ahead. Going back to the fork and taking the ascending stairs will lead you to another chamber. There are a few more ettins here, and a portal with a combined mana container behind it. The portal leads to the swamps of Darkmere. For the other puzzle switch, see: Horn puzzle switch. To go directly back to Shadow Wood, see the relevant section.

This puzzle switch requires the Horn key, which can be found on the Wastelands.

The Horn Door is found in the southeast corner of the map. To get there from the beginning of the level, turn towards the lefthand passage, southeast from the entrance. Continue straight ahead, past the rift in the ceiling, and turn left before you see the pool of water. If you are in the high chamber, you can ride the waterfall down; and then proceed east through the lower southern chambers until you find the same southeastern chamber, this time on your right. There are a couple of ettins inside the cramped chamber. Climb up the steps to the far end and you will find the Horn Door. Behind it is another chamber and a crowd of ettins. You will notice that the walls look different - they are made of a kind of rock found on the Wastelands. There is a portal to your left, with a combined mana container behind it. Ahead, along the eastern wall, there are several crystal vials. Set in the center of that wall is the puzzle switch that you came for. The portal leads to the Wastelands. For the other puzzle switch, see: Swamp puzzle switch. To go directly back to Shadow Wood, backtrack to the first chamber, then see the relevant section.

If you are not in the northern chamber of the caves, that is where you need to be. To get there, you can take the righthand/northwestern path from the first chamber. If you are in the high chamber, then simply climb the ascending northeast tunnel and drop down. To the northwest, the chamber opens onto the outer chasm. You will have to cross this chasm by way of a landbridge that snakes across. The bridge is guarded by several ettins, and there are afrits lurking far below. There is a porkelator artifact hidden on the bridge (see Secrets for more info). Going up the narrow stairs, you will pick up crystal vials, then reach a central junction. Straight ahead to the east is a landing full of fléchettes. The bridge proceeds northward then runs east, flush against the wall. Here you will fight a few more ettins and pick up mana. At the end of the bridge, there is a doorway to the left. It leads into an outpost constructed of brick. There may be another ettin or two to deal with. Inside the outpost, there is an altar with quartz flasks and combined mana. To the left/north of the altar is a teleporter - jump in, and it will send you back to the beginning of the map, just outside the caves. You are now right in front of the northern portal that leads to the Shadow Wood.