Locus Requiescat is one of the offshoot maps from Constable's Gate in the second hub of Deathkings of the Dark Citadel. 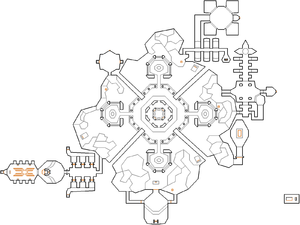 Map of Locus Requiescat
Letters in italics refer to marked spots on the map. Sector numbers in boldface are secrets.

Your first visit to this graveyard map is literally a flash. The Axe key is right in front of you. Just walk around the side of the bars to get it.

To exit the map turn around from where you start to find two small passage ways with lifts that lead up to a room with a ledge that overlooks the graveyard below. On this ledge is a switch. Pressing it will lower the wall at the back of the room behind you. Behind which is the portal back to Constable's Gate.

You should now have all three Yorick's Skulls. The Locus Requiescat is split into four segments, the one where you start and three others. At the entrance to each segment is a headless statue of Yorick. Placing one of your skulls on a statue will remove the trees blocking access to the area behind the statue. In each of these areas is a switch, all three of which must be pressed to access the Castle Key.

Having placed a skull on this statue and dealt with the reivers that emerge, enter the only accessible exit down hole and along the narrow passage to come to a wider corridor with a sealed door at the end and several doors down the sides; behind each lurks a chaos serpent. Slaying five of these will open the sealed door revealing a room with a switch. This switch will raise a step back outside allowing you to reach the other exit off this segment. It will also open the walls on either side of you revealing an afrit and the entrance to the spider's tomb (pick up the shield) if you wish to try to get some goodies.

Head back outside and climb the steps up to the other exit off this segment to a room containing the required switch to complete this segment and also a pair of teleporters that take you to the ledges you could see behind the chaos serpent rooms and a couple of small goodies.

There is only a single passageway leading off this part of the graveyard accessed after placing a skull on the statue. Down the end of this corridor is a switch that opens several walls back around the corner revealing pens containing dark bishops. The back wall of one of these pens is fake (marked with an unlit torch) and leads to another room containing more bishops and the segment's switch. Pressing it will open several more Bishop containing pen's around you.

The right exit from this segment leads to a large amount of combined mana that you can get if you follow the rule. However break the rule and it's game over.

The left exit is where you need to go here. After dealing with all the afrits lurking inside, notice the large number of destructible corpses (some of which are up in alcoves behind the statues) and also the destructible tree.

Destroying the tree opens a wall behind you leading up to the small windowed room containing a couple of Bishops who had been trying to attack you through a window that was too small for them to fire through, along with a Krater of Might.

Destroying all the corpses opens a smaller wall near it containing the segment's required switch.

Getting the Castle key

Having pressed all three switches, the edge of the large tower in the center of the map lowers allowing access to its interior. Dead center of it sits the Castle key on a raised pedestal. Picking it up will trap you briefly as several unavoidable darts and fireballs are launched at you from wall mounted launchers. An Icon of the Defender or Chaos Device is helpful to survive this trap, but after a moment it stops on its own and you are free to escape.

You are now done with this map. Return to the Constable's Gate.

* The vertex count without the effect of node building is 1652.