Market Place is one of the offshoot maps from Constable's Gate in the second hub of Deathkings of the Dark Citadel. 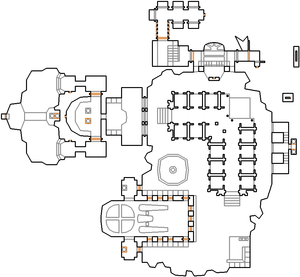 Map of Market Place
Letters in italics refer to marked spots on the map. Sector, thing, and linedef numbers in boldface are secrets.

You have two tasks on this map, both of which can be completed in a single visit:

You begin facing several Dark Bishops who all have their back to you. Slay them, smash one of the windows to get outside the starting room (the doors are sealed from the inside, but not the outside) and go up to the gallows. Next to it, you can find the key.

Following on from the above. The skull is located in the structure in the middle of the outside area. But you have to raise some stairs to get up there.

There are two other exits leading off this area, one of which is currently sealed. Enter the other one and climb the small stairs to the ledge with the two stuck Chaos Serpents on and press the switch to open the door just behind and to your right. Travel along the revealed corridor past the several locked doors to press the switch at the end of the corridor. This opens the other exit leading off the outside area and also the doors around you revealing Ettins. Finally is also activates a series of fireball shooters just back around the corner. If you are quick you can run back along the corridor before either the Ettins or fireball shooters can be alerted or activate respectively.

As you come back down the corridor, the door opposite you will open revealing another Chaos Serpent. Once it is slain, enter its pen where a wall will slide away revealing another switch. This switch will raise the stairs leading up to the central structure. Deal with the number of Slaughtaur (a couple of which are actually stuck) up there if you haven't dealt with them earlier and find the Yorick's Skull opposite the platform with the Quartz flasks on it.

With the skull and key you are done with this map. Head through the newly opened exit off the outside area and press the switch to make a teleporter entrance and exit appear behind. Entering this teleporter will take you to a ledge overlooking a small chasm. At the other side is the portal. You have to raise the bridge to reach it though. Return through the teleporter and enter either of the doors on your left and right. Down each is a switch that raises half the bridge. Once both switches have been pressed, you can access the portal, which takes you back to Constable's Gate.