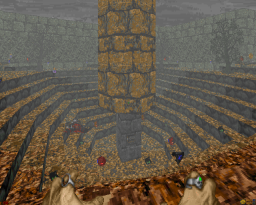 Sacred Grove is the secret map from the second hub of Hexen, Shadow Wood. It is accessible via a hidden portal on the Shadow Wood map, which is unlocked once the main puzzle of the hub has been solved.

Even the most hallowed spots have not been spared desecration. However, divine aid lies hidden for he that redeems this place and forces set in motion here will reveal future secrets. 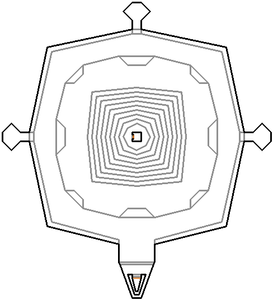 Map of Sacred Grove
Letters in italics refer to marked spots on the map. Sector, thing, and linedef numbers in boldface are secrets.

You appear in a large, open arena with a column in the center. Numerous ettins are scattered around the arena. The number of ettins vary by difficulty - six (6) on lower difficulties, eight (8) on medium difficulty, and twelve (12) on higher difficulties.

The strategy is simple and straightforward: kill all the ettins as quickly as possible.

After ~55 seconds (around the time the music speeds up), additional ettins start spawning at ~10 second intervals. Typically four (4) new ettins spawn, one at each compass point (there may be less if spawn points are blocked). On each interval, a message informs you as to how many ettins remain. If the number of ettins present exceeds twenty (20), you lose - the message then reads "you waited too long, now you die!". At this point, the exit portal is permanently sealed, and groups of four green chaos serpents continuously teleport in, ultimately overwhelming the player.

However, if you are diligent about mowing down the ettins, you should not have any difficulty passing the test. The arena has a hoard of health and mana pickups of all types, so there is no need to hold back. Fléchettes are not necessary for the crowd - your second and third weapons should suffice. Your third weapon is recommended, especially the mage's Arc of Death (see Bugs for more info).

Once all the monsters are slain, you win. The central portion of the arena descends into circular steps. These lead down to a square pillar at the bottom of the central column. On the west face of the pillar is a puzzle switch - activate it, and you are informed that "a door opened on the forsaken outpost", a map on the fourth hub.

Before you leave, you should make sure to collect all the items strewn around. When you passed the test, extra items appeared - four discs of repulsion around the perimeter, and four combined mana containers near the pillar. There are eight quartz flasks to pick up, one on each corner of the inner and outer perimeters. There are plenty of crystal vials, as well as blue and green mana all around. In each of the cardinal directions sans south, near the discs of repulsion, there are hidden chambers behind the vines - each houses a mystic urn, for a total of three.

Once you have pulled the puzzle switch, and gathered your fill from the veritable treasure trove, you may return to Shadow Wood through the portal to the south.

There are three Mystic Urns hidden in the walls of this map. Walk through the vines to the north, east, and west to find them.

There is a glitch that can be triggered by using Frost Shards. It seems that the game counts the number of corpses to keep track of your progress in the test. However, frozen enemies do not leave corpses behind; therefore use of the Frost Shards causes the game's scripting to get thrown out of sync, and it behaves as though there are more ettins present than there actually are. The mage can avoid this by using the Arc of Death, which is a more powerful weapon in any case.

It is possible to "win" after the chaos serpents appear by killing every monster. However, they spawn so quickly that it is impractical without cheating, and the exit portal remains sealed anyway.

* The vertex count without the effect of node building is 172.