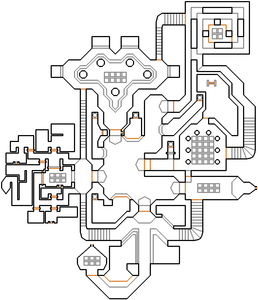 Map of Treasury
Letters in italics refer to marked spots on the map. Sector numbers in boldface are secrets.

Treasury is a vertical and completely linear map. You can also find the exit to the hub's secret level here.

You begin in a pool of water at the bottom of the map where a dark bishop and a stalker immediately attack at close range while chaos serpents fire on you from high ledges. Several more stalkers are also moving on your position from the other end of the pool. Quickly navigate the snaking pool dealing with anything that gets in the way, to take the only exit. At the end of the hall is a switch that will raise some stairs to the right allowing you to begin your climb. This is how the majority of the rest of the map plays; pressing certain switches to raise the stairs up to the next area.

In the first area, the switch is down the end of the corridor beyond some barrels, which conveniently block your shots but allow the taller chaos serpents behind to fire at you. You have to jump over the barrels to get them. Once they are dead press the switch behind them to raise the next set up stairs, though watch out for the group of afrits that are activated.

Up the next set of stairs is a circular corridor. The switch to raise the next set of stairs sits on the ledge off the south side of this corridor, right behind a trigger which lowers the centre of the corridor and unleashes a load of bad guys. You can either fight them trapped on the small ledge or, at the cost of a little health, jump off the ledge into the pool below and work your way back up the stairs to fight them from there.

Once you progress up the next set of stairs, you are presented with two directions. Left will take you to the ledge directly overlooking the area of the pool you started in and also an Icon of the Defender, While left takes you down a spiraling passageway full of ettins or afrits depending on the class you are playing.

Once you reach the centre, the walls will lower unleashing several Dark Bishops and also revealing a small passage way leading up to the next set of stairs, which this time you don't need to press a switch to raise.

We are now at the top of the map presented with another room full of bad guys.

The portal to a new area of Constable's Gate and the Heart of D'sparil, if you wish to complete the hub now, is to your right.

However you can also get to the hub's secret map from here if you wish.

To your left hanging over a drop is a Mesh Armor pickup. But getting it means you have to drop down the hole, which, at the cost of a little health leaves you standing at the bottom of the first set of stairs again. To access the secret map you have to take the drop and then work your way back up here.

Straight ahead is a Chaos Device. As you approach it (or where it was if you have already picked it up), assuming you fell down the drop the above mentioned Mesh Armor was over, a wall will open to your right revealing a teleporter that leads to a series of teleporters that will take you to the various pens that Dark Bishops were firing into the pool area at you from. In one of these pens is the portal to the hubs secret map: Armory.

* The vertex count without the effect of node building is 1184.