Chantry is one of the offshoot maps from Nave in the third hub of Deathkings of the Dark Citadel. 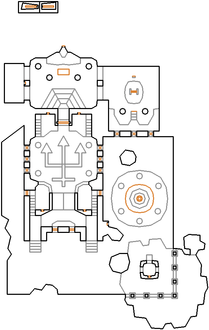 Map of Chantry
Letters in italics refer to marked spots on the map. Sector, thing, and linedef numbers in boldface are secrets.

Note the exit switch back to Nave directly behind you when you start and jump down from the tower you begin and battle the afrits if you are a Mage or Cleric, or chaos serpents if you are a Fighter. You could also choose to fire on the monsters from the tower. But watch out for the afrits that will also, eventually, rise out of the pit surrounding the tower.

Enter the Chantry through the only entrance. A large battle awaits you in the hall behind the doors, though you don't have to kill the occupants to unlock the door at the far end of the hall, only press four switches on the balconies surrounding the room, two of which are actually accessed from outside the hall.

Each of the four switches you press will create part of trident image in the ceiling. Once all four switches have been pressed a few dark bishops will teleport into the hall and the aforementioned door will become unlocked (though you aren't actually told this).

Behind the now unlocked door is a large group of ettins and up on a high pedestal you can see the Cleric weapon icon, currently inaccessible. In front of the pedestal is the maps gear. Return to Nave using the exit switch up in the tower where you started the map and place it in the correct panel (the one nearest the Chantry portal).

Gear placed, go back to where you found the gear to find a switch behind the pedestal has been revealed. Pressing it will open a room to your left, which contains another switch which opens a larger room over the other side (to the right of the switch), in which are a few afrits and dark bishops.

Once the area is clear walk up onto the ledge the dark bishops were on to trigger the raising of a switch behind you. Pressing this will make a portal rise out of the pool of water in the middle of the room that takes you to the start of Abbatoir and will also raise steps up to the pedestal that the Cleric weapon icon sits on. Collect it and your work on Chantry is complete. Go back to Nave.