Cloaca is an optional map that you don't have to enter to complete the third hub of Deathkings of the Dark Citadel; Nave. But in order to access the hub's secret map, you have to complete it. 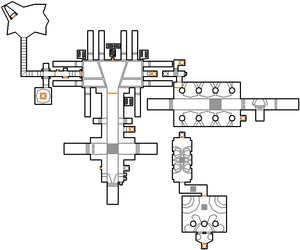 Map of Cloaca
Letters in italics refer to marked spots on the map. Sector numbers in boldface are secrets.

When you begin this swamp map, several stalkers will immediately attack while several ettins begin with their back to you and will be alerted when you respond. Though you can make a quick getaway using the exit switch back to Nave, which is in front of you where you start, if you wish to.

Once they are dead, note the steel barriers blocking access to what appears to be a book. This is one of two books needed to open access to the hub's secret map. The second book can also be found on this map.

Walk over to the edge of the slime fall and jump off when you are ready. A few stalkers await you down there and you may be able to reduce the fall damage by landing on one of them when they come out of the water. In the pool is a switch, which will open the sluice gates and raise the pool up to the previously inaccessible teleporter on the right side.

Entering it will leave you facing a switch and another teleporter blocked off by a bar to your left.

Pressing the switch will open the metal door back in the pool, which reveals a corridor with a couple of traps in that leads up to a Dark Servant guarding by a group of afrits and also a portal to the start of Chantry.

But you don't need to press it to complete the map. To the right off the switch is the entrance to a room filled with bad guys, that has another teleporter at the far end.

Note the steel barriers blocking access down the river of slime. The second book can be got from behind these at a later time.

Enter the teleporter to appear in a dark room. Torches will light as you move down the room. At the end of the small corridor at the end of this room is another room, in which you will find the map's gear and a teleporter taking you back to where the first one dropped you off. The bar blocking the teleporter to your left will now have risen. Entering it will teleport you back to the maps start where you can use the exit switch to teleport yourself back to Nave.

Once you have placed all four gears on the Nave, re-enter Cloaca and then exit back to Nave.

Upon your return to Nave, you will get a message saying that Barricades have opened on Cloaca.

Return to Cloaca again to witness the barrier blocking access from the book mentioned in the main walkthrough above raising. The barriers blocking access to the other book have also risen. If you defeated all the monsters on a previous visit, there shouldn't be any opposition to you grabbing both books except a Stalker behind the second barrier.