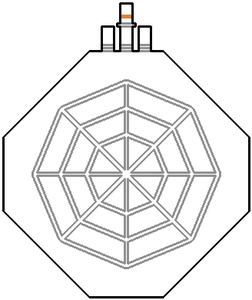 Map of Dark Citadel
Letters in italics refer to marked spots on the map. Sector numbers in boldface are secrets.

There aren't any tactical options here aside from keeping in constant motion while making effective use of everything in your possession; it's a flat and open arena. After a few seconds, three waves of enemies will teleport in before one of the Deathkings appear, breaking through a painted window of their class. The cycle repeats until all three Deathkings are dead. Ammo, health and artifacts will be teleported in at each stage to assist you.

Once the final Deathking is dead, a portal will appear behind where the second one came from. You've completed the game.

The first two times the Deathking is released, the web cools. First it changes from lava into water, then into ice.

* The vertex count without the effect of node building is 148.