DarkWatch is one of the offshoot maps from Nave in the third hub of Deathkings of the Dark Citadel. 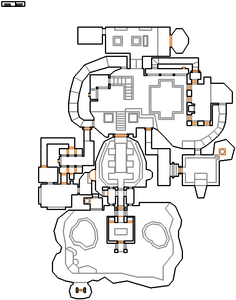 Map of Dark Watch
Letters in italics refer to marked spots on the map. Sector numbers in boldface are secrets.

You begin this map in the middle of a large amount of chaos serpents, centaurs, slaughtaurs and stalkers.

The portal back to the Nave is on the ledge behind you and can be reached by jumping up the steps.

Once the battle is won, enter the small door in front of you. Though you can check through the cage around the left side of the door to see the Fighter weapon icon you are after if you wish.

After the second door, to your left is an elevator disguised as a fake wall with dungeon handcuffs. It will bring you to the alcoves surrounding a bridge. You can use Boots of Speed to run and jump to the second alcove with Dragonskin Bracers. Take the elevator marked with two candelabras. To your right is another fake wall with dungeon handcuffs. Open several more dungeon handcuff clad walls to reveal an Icon of the Defender. A second room filled with barrels provides yet another fake wall. Opening it and following the hall provides an Amulet of Warding. Now, return to the bridge.

Cross the metal bridge over the small drop, but watch for the slaughtaurs on the raised alcoves on either side and open the door to enter the heart of the watch where a large group of afrits greet you.

Take a sharp left from the door you entered from and then another left through a small wooden door behind which is a corridor of water with a switch at the end. This opens up bars at the top of the small wooden stairs you likely noticed in front of you when you entered the area. Go up those stairs and press the switch up there to open the large doors to the right of said stairs.

Inside are more afrits. In the top left corner of this room is a raised area you can jump into. In this small room in amongst some barrels is the map's gear.

Go back to the Nave to place it.

Once you have placed the gear, a message will tell you that some stairs have risen on Dark Watch (technically, they have lowered, though).

The stairs in question are what was a ledge along the right side of the main area of the map. Head up them into a room ringed by stained glass windows. Smash the one that faces the wrong way to reveal a door behind it. Down a corridor behind it will lead you up to a narrow area that you could see through windows from the outside. At one end of this area is a switch that opens some bars blocking a teleporter.

The teleporter can be found down the corridor immediately to the right of where you first entered the maps main area. (just to the left of the stairs you lowered with the gear). At the end of said corridor is a room with a Maulotaur statue on a raised platform. In one of the corners of this room is the now-accessible teleporter.