Ice Hold is the secret map of the third Hub of Hexen: Deathkings of the Dark Citadel, accessible from Nave. Ice Hold is essentially a large ice crater with a high tower in the middle. The only foe on the map is the wendigo. 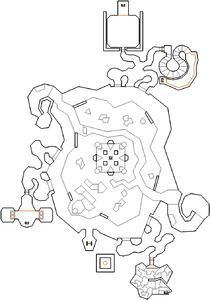 Map of Ice Hold
Letters in italics refer to marked spots on the map. Sector, thing, and linedef numbers in boldface are secrets.

You begin this map in front of the exit portal. It is blocked by icicles though, which will need to be removed before you can exit. This is achieved by hitting a switch in the central tower. Your main objective in this map is to create a bridge over to the tower. This is achieved by pressing four switches in side areas around the crater, which can be done in any order.

Head through the door and the required switch is right in front of you. However the door into the room is not reopenable.

As you press the walls of ice on either side of the room will slowly melt as fire is activated underneath them; revealing several wendigos. Entering either of these side rooms once you can fit will open the door out of the room for a few seconds, whether or not the wendigos are dead.

A square room in which the middle is blocked off by icicles greets you behind this door. While a crushing pillar of ice circles it. The switch is on the other side of the room. It is possible to squeeze through the gaps between a couple of the icicles to grab the Dark Servant inside.

Travel down the curving stairs battering the wendigo on the way to come to a vaguely L shaped room. Note the darker edge. The switch is around the far corner of the room. Pressing it will turn the lit area of the room into a bottomless pit.

Travel around the corner to the back of the room to find the switch. Immediately backpedal once you press it though as a block of ice will fall from the ceiling directly above it, crushing anything caught underneath.

The floor of the entire room will break up meaning you have to carefully navigate back to the door.

Once you have pressed all four switches, a magic bridge leading to the central tower will appear approximately in front of the eastern side area. Note that bridge is extremely slippery (i.e. like ice), so take it slowly. Defeat the wendigos occupying the tower if you haven't already taken them out from afar and press the switch to remove the obstacles blocking the exit. The map is done and the unblocked portal will take you back to the start of Nave.

You'll also find the hub's Wings of Wrath in the tower that you can use to fly around and pick up the numerous combined mana pickups in the crater if you wish without fear of falling. With the wings, you might also wish to check down both ends of the ravine that runs down the middle of the map for two large treasure troves. However, you should pick up the wings before you hit the central tower switch nearby or the wings will disappear.