The Castle of Grief is the first map in the hub of the same name.

From here, you can go to Hub 4: Forsaken Outpost and, after solving a puzzle, Hub 4: Gibbet.

In this fortress of pain, suffering lasts an eternity and only time can tell if you will persevere to venture onward. 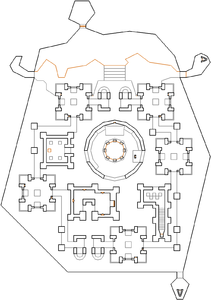 Map of Castle of Grief
Letters in italics refer to marked spots on the map. Sector, thing, and linedef numbers in boldface are secrets.

You begin in a small room located in the north end. Here you are greeted by an Icon of Korax, which says: "You have played this game too long, mortal... I think I shall remove you from the board." Once outside, you will be approaching the castle from the north. It should be noted that like Heresiarch's Seminary, the castle is guarded by many monsters from the beginning and onwards. Some are on the ground, while others shoot at you from the ramparts. Be wary of the rising wooden spikes scattered around the map.

The castle is protected by a wall running between five guard towers located roughly in the northwest, west, south, east and northeast. There are two openings in the wall – one in the north end center and one in the southwest corner. On both sides of both entrances are lifts to the castle wall, although they aren't working yet.

Between you and the castle is a moat that has a wooden drawbridge in the middle. To get into the castle, you need to go into the water and pull the switches on either side of the drawbridge. Be aware of the Stalkers roaming about. Once both bullhead switches are pulled, stairs will rise to let you into the castle's north entrance.

Inside the walls you will find four buildings:

Your first mission is to activate the clock in the clockhouse. To do this you need four clock gears; the order in which you acquire them is not important.

With all four clock gears enter the clockhouse and open the shutters on the wall. Insert the four clock gears to their corresponding places. When all four have been placed the clock begins working, and you get a message that in the tower a ledge has lowered (revealing a Dark Servant artifact). Riding the ledge up leads to a teleport switch to Gibbet.

The northeast guard tower has an Amulet of Warding in its southwest corner. Outside the castle walls, there is a Krater of Might next to the northwest tower near the ledge above the moat.

The Forsaken Outpost exit is located at the map's southeast corner.

In version 1.0, this level includes a major shortcut that got created by a mapping oversight. It allows the player to disregard many of the hub's puzzles and also lets him skip the Dungeons completely. To access the shortcut, the player must turn into a pig by either being shot by a Porkalator projectile in the tower or by bouncing an own Porkalator bullet back from a Slaughtaur's shield in order to get hit.

As a pig, the player can slip through a low opening at the eastern end of the moat in front of the castle. Behind the opening, there is a portal to Effluvium. If it is used, the player will arrive near a second portal to the Forsaken Outpost. By traveling through this portal, the player is already about to solve the Axe key puzzle that is one of the last puzzles in the hub. Once the player walks over a certain line in the hall where he had arrived, the cage of the Axe key will open in Gibbet. After the action, he must return to Effluvium where he can continue to Gibbet. When he gets there, he will only need to go to pick up the Axe key and enter the Axe door for the boss fight and the next hub.

By using the intended way to pass the hub, the player would appear to the Castle of Grief from Effluvium after having solved the majority of puzzles and fought the way through the Dungeons. The shortcut was blocked for version 1.1.