Castle of Pain is a deathmatch map in Hexen: Deathkings of the Dark Citadel. It uses the music track "Wobaby", or "Falcon" if using Hexen's audio CD music. 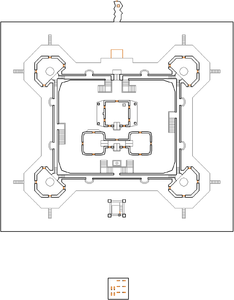 Map of Castle of Pain

The level features a square castle containing a few one-room buildings, and a belltower outside the castle. A cavern on the northern side contains a teleporter to inside the castle and the switch leading back to Transit.

There are some scripted events, such as glitter bridges appearing when crossing certain linedefs, or a large number of stained glass windows that can be shattered to open shortcuts.

It is also the only deathmatch level to provide some vague gameplay in single-player, as there is heavy monster opposition concluded by a heresiarch in the belltower.