Deathfog is a deathmatch map in Hexen: Deathkings of the Dark Citadel. It uses the music track "Swamp", or "Bones" if using Hexen's audio CD music. 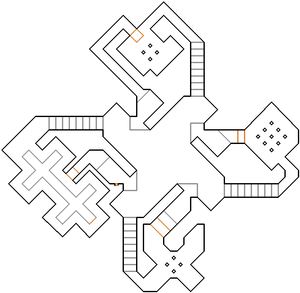 The level is built around a cross-shaped foggy swamp. A nearly swastika-shaped glittering bridge connects together the four non-stairways openings, at the center of which lies Wings of Wrath. In each of the side rooms, the walls not featuring brown vines can be activated to open hidden passages. At the south-east end of the south-west room, the central part can be lowered by hitting it. The raised platform overlooking the swamp area on the south-west features the switch leading back to Transit.