Desolate Garden is a secret level in the fourth hub of Hexen. It is only accessible by crossing a line leading to the exit in Bright Crucible of the first hub and pressing a switch in Sacred Grove of the second hub.

Though devoid of vegetation, things still sprout within the garden. If you survive the deadly crop, you will find precious aid to your quest. 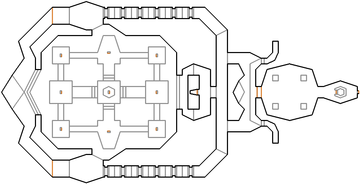 Map of Desolate Garden
Letters in italics refer to marked spots on the map. Sector, thing, and linedef numbers in boldface are secrets.

In this map, you can collect all three pieces of your fourth weapon, if you have not done so otherwise.

You will start in an open square. You will be greeted by Dark Bishops firing on you from a window in the eastern wall across from you. There are Green Chaos Serpents in the window on the western wall just behind you, and they will start firing when they notice you. Around the central square, there are eight outer switches and one center switch. The outer switches will randomly rise and fall, one at a time. As you pull the switches, the level will open up. The order you activate them does not matter, rather, the level will change after every two switch activations. The exception is the center switch, which is always the last to rise.

Each time you pull an outer switch, a random monster will appear. It could be any of the following - Ettin, Afrit, Green Chaos Serpent, Centaur, or Slaughtaur. The center switch teleports in several Dark Bishops.

There are alcoves in the northern and southern sides of the square, each containing Ettins. The elevators and staircases can be accessed here. The elevators bring you to the western corridors, where you will face several Green Chaos Serpents, and a Dark Bishop in the southwest. You will find Blue and Green Mana, and your second and third weapon respectively. The corridors are divided by a central structure. This structure has a Krater of Might, and an enemy depending on your class (Fighter: Slaughtaur, Cleric: Brown Chaos Serpent, Mage: Green Chaos Serpent). Once you have crossed the western lines of the elevators on their top floors, there will be a delay of about 14 seconds after which the structure will descend.

Once six switches are pulled, both staircases will open. They are filled with Afrits, but also Crystal Vials to replenish your health. They lead to an adjoining corridor with more Afrits. There will be two entrances to the eastern sewer. If you pulled all nine switches, there will also be an entrance to the portal area. The portal area has Dark Bishops, Combined Mana, a piece of your final weapon, and of course the exit. The first weapon piece is behind the portal, overlooking the courtyard.

The eastern sewer has a corridor of Ettins, and a large room with Centaurs. The second piece of your ultimate weapon is near the eastern end of the room. This spacious room contains the slime trap puzzle. Once you enter, the door will seal behind you after two seconds, and the room will start filling up with slime. It will eventually reach the ceiling and crush you, so you must deactivate it. The switch is at the easternmost end, behind a pillar and guarded by a Slaughtaur. It is high up on the wall, but will become accessible when the slime level rises high enough. Set the skull face to glowing, and the slime will stop and drain out. The door will open, and directly across, there will be the final segment of your ultimate weapon as your reward (and a Green Chaos Serpent). The slime room also has Mana and Crystal Vials to make it worth your while. As the slime trap does not activate instantly after entering, you have time to exit the slime room. However, if you are outside the room when the trap activates, the contents of the room will become inaccessible.

If you have not already done it, you should pull all nine switches to open the way to the exit portal. You can also check the western corridors for the Krater of Mights, as well as the area behind the portal for the third weapon segment. Having completed the level, you can take the portal when you are ready, which will return you to where you left from Forsaken Outpost.