Dungeons is a map in the Castle of Grief hub. It is the 24th map in Hexen, and is named MAP25 in HEXEN.WAD.

In this prison's long and bloody history, only a single captive ever escaped. With no witnesses save for the prisoner's cage, the means of the breakout remains a mystery. 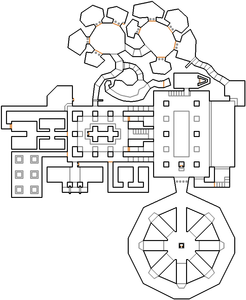 Map of Dungeons
Letters in italics refer to marked spots on the map. Sector, thing, and linedef numbers in boldface are secrets.

You will arrive in a small room with a portal back to the Gibbet. There is a staircase leading down to the main room, which has a central lava pool full of Afrits. At the far end is a barred passage, and to the right/west there is an open stairway. Watch out for an Afrit next to the stairs. You will enter a dark dungeon area shaped like a rectangle, full of Afrits and Ettins. At the far end of the rectangle is a skullface switch. This will open the barred passage, which leads into a large ring area. From the center you will see seven prison cells which you can't enter just yet. Around the perimeter, there are Ettins, as well as Fléchettes and Discs of Repulsion. Going back out of the passage, you will see a sun/moon switch facing you on the pillar. You can press it 7 times - each time opens the back wall of a prison cell and generates a Slaughtaur. After they're all opened, another sun/moon switch will appear on the pillar in the center of the southern ring area. This will open two new paths in the main area by the western dungeon entrance. You can ascend either one to get to the balcony of the dungeon area. One has Fléchettes, the other Crystal Vials.

Once on the balcony, beware of the Slaughtaurs in the window at the far-right/northwest corner. There are a few different side rooms to enter. On the left/southern wall, the passage closest to the stairs will lead to a Porkelator artifact guarded by a couple Ettins. The next passage leads to an area with Green Chaos Serpents and Slaughtaurs in 2 cages, with a switch to open doors to the cages. This area is not worthwhile, as there are only 2 Discs of Repulsion for your trouble. The next passage leads to a large room full of cages and Slaughtaurs. There is green mana at the far/southern wall, but nothing else. The next passage, at the far/western end of the rectangle, is where you need to go. There are two side rooms with Fléchettes, Crystal Vials, and one Ettin each. At the end are two rooms full of dead bodies. The right-hand room has an opening wall at the far end, leading to the Slaughtaur room behind the window. There are Fléchettes in the passage, and a Mesh Armor in the room itself. Next to the window is a skullface switch - it opens the window and a new passage directly ahead, leading into caverns.

Before you move on, you may want to collect the items on the high shelves visible from the main room. To do this, you must leap from the balcony down to the illuminated raised platforms with Quartz Flasks. Once there, you can open the wall, which reveals an elevator to take you to the Combined Mana on the shelf. If you are the Mage, there will also be Frost Shards on the northern ledge.

Entering the cavernous area in the north, you'll find a room with several Green Chaos Serpents and barred cells containing Ettins. Next to the entrance is another staircase, leading to a similar room with Green Chaos Serpents and caged Ettins. But be careful - once you have killed all but one Green Chaos Serpent in these two rooms, the cages will open, releasing all the Ettins at once. The cells in the second room contain (clockwise from entrance) Discs of Repulsion, Quartz Flasks, Green Mana and Blue Mana. The Green Mana cell has a passage leading to an optional area. If you want to find the exit right away, skip the next paragraph.

The staircase at the back of the cell leads a small room with Afrits. On your right, there is a large area filled with Afrits, along with Dark Bishops at the far end. The area is cluttered with dead bodies which hinder movement. There are several Mana containers of all types as a reward. At the far side, a staircase will be open, leading back to the main room with the lava pool. There are two Quartz Flasks at the bottom of the stairs. By this time, there will be many Ettins in the main room, so take caution.

To find the exit, first go back to the first cavernous room with cells. The first cell on your right will contain a bullhead switch. This will open a wall in the passage leading in from the dungeon. You will enter an area with a Centaur and a sludge river with Stalkers. The river enters a cramped, shadowy area, which ends in a sheer drop. But don't panic! The fall will transport you safely to Effluvium.

If you destroy all 34 sitting corpses, a Dark Servant will spawn between the lava pit and the stairs that lead to Gibbet portal.