The Gibbet is one of the maps accessed from Hub 4: Castle of Grief (map). This is almost like a sub-hub in itself. From here, you can access Hub 4: Effluvium and Hub 4: Dungeons.

Many have lost their heads and their lives in this killing ground. 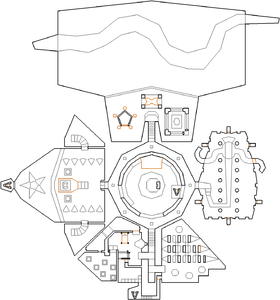 Map of Gibbet
Letters in italics refer to marked spots on the map. Sector, thing, and linedef numbers in boldface are secrets.

The level itself is a killing floor connected with an underground library, master bedroom, dungeon, balcony, hypostyle hall, and throne room.

You will start on a platform very similar to the one you just left. Pulling the bullhead switch, you’ll descend into the central area of Gibbet, where several Afrits will greet you. The circular area has a pool in the center with a Stalker Boss in it (or a Stalker if you're the Fighter). To the left is a portal back to Castle of Grief. There are Fléchettes around the perimeter.

You can explore the adjacent rooms and corridors to an extent. But the first objective is to solve the Yorick's Skull puzzle. First of all, you will need the Liber Oscura and Daemon Codex, the two puzzle items from Forsaken Outpost. If not, you will need to take the portal back to Castle of Grief and go there. Assuming you have them, you will exit the wide southern opening of the circle, and go straight ahead down the southern corridor. The second bookcase on the left is the door to the library. It can damage you while it rotates, so move through swiftly. Once inside, you will fight numerous Ettins, some of them behind the stacks. Once you have cleared them, head to the eastern slanted wall. The easternmost bookshelf of the center row is the key - it has a unique design with a skullface on top, like the door. There are two openings in the row of books, where you will place the Liber Oscura and Daemon Codex. Once you have done this, the room darkens and several bookshelves lower to unleash Dark Bishops from the ceiling. In the middle of the bookcases, you will now find Yorick's Skull.

With this, head back to the circular corridor and go to the eastern entrance on your right. You will enter a large pillared hall with many Dark Bishops. The stained glass windows mostly conceal Quartz Flasks. The southernmost window has a skullface switch guarded by a Slaughtaur (and the Mage’s third weapon). The switch will raise a bridge across the crevice to the headless Yorick's statue. The northernmost window has a Slaughtaur and the Fighters third weapon, and the northeast window has a Combined Mana container. Place Yorick's Skull on the statue, and be careful. After a short time, the room will quake and the floor will fall away, except the path demarcated by the torches. It is important to have activated the skullface switch, otherwise there will be a large gap between the statue and the path that is not easily jumped.

From here, return to the central circular room. The pool in the middle will have lowered to reveal a teleport switch on the pillar. This brings you onward to Effluvium.

Returning from Effluvium, you will find yourself back in the central pool. You should go back down to the southern corridor, but instead of the library, you will be going through the first bookcase door on the right. You have to be careful of it the same way, and you will pass through the left side instead. Inside, there is a bedroom with Centaurs roaming and a Slaughtaur in a barred area. When the Slaughtaur is defeated, a passageway will open on the left. Another left turn brings you to a storage area with more Centaurs. There is a Quartz Flask and several Fléchettes around the barrels, but beware. The darkened portion of the wall indicates a small death trap pit near the southeast corner. You will come back to this area later. You can enter the Slaughtaur’s barred area to pick up a Porkelator artifact.

Back in the bedroom, there are several things of interest. First of all, do not be lured by the Crystal Vial on the four-poster bed - it is a crusher trap. The pots in the northeast corner contain the Fighter’s third weapon. Activate the nearby bookcase, and you will descend to a basement with Ettins, Centaurs, and Crystal Vials for your trouble. Dark Bishops will see you through a window at the southwestern end, and you can take them out early with projectiles. The bullhead switch will take you back up. The raised wooden area has Dragonskin Bracers and a bullhead switch on the wall. Pull it, and stay right near it. The wooden floor will disappear and create a pitfall. You can jump toward the side ledges at an angle to safely get out. This switch will also have opened a necessary passage in the dungeon area. At the far western end of the bedroom, there is a Dungeon Key door. As you open it, the doors swing outward. Inside, there is a dungeon full of cages with corpses inside, and Ettins. There will be an opening in the northern wall adjacent to the entrance, provided you pulled the previous switch. If you did not take them out earlier, there will be a few Dark Bishops to deal with. The westernmost end to your left has another bullhead switch. Pull it, and you will hear an opening sound. You will have to go back into the bedroom, and into the southern storage area. Now, there will be a narrow staircase descending along the southern wall across from you. As you reach the bottom, be wary of the small pitfall on the left. Turning right will bring you to a room with a portal to Dungeons, where you will continue your quest.

In the southeast corner of the portal room, there is a narrow staircase leading upwards. At the dead end, shoot the wall in front of you and it will open to the library. This provides a shortcut between the Dungeons portal and the rest of the level if needed.

As you return to the Gibbet, you will see the message “You hear a door open upstairs”. Its time to head up the northern stairs to the balcony. You will be in for a sizeable fight here, as you face off against Centaurs, Slaughtaurs, Ettins, and Dark Bishops. The Dark Bishops will fire their projectiles through bars on the right - this is an opportunity to cause monster infighting. The structure in front of you has several Quartz Flasks underneath it, but be careful - it is a crusher trap. There is a hollow indent in the crusher so that you can stand inside of it safely, but if you slip up, you will be killed. Luring the monsters under the crusher and triggering it is a risky but effective strategy. To your right, there is more room for maneuvering and cover, and a pentagon structure surrounded by pillars. The green pillars hold Fléchettes, but they are also mini-crushers which will damage you (although only by 5 HP at a time). The southern wall of the pentagon structure opens to reveal an interior with several Afrits and a Disc of Repulsion. Stepping inside causes the torches to light, brightening the room. Once you have cleared the area, your remaining objective is the Axe Key. Go over to the southeast corner of the cage, in the far corner of the room, and you will find an opening. Strike down the suit of armor if it is still standing. Enter, and the pillar will descend to reveal the Axe Key.

With this, you can now enter the Axe Key door, located in the west of the circle (to your right as you leave the balcony). You will find yourself in a large throne room, greeted by Centaurs. Be aware that once you enter, the Axe Key door closes behind you and cannot be re-opened. Step up to the throne, take the Icon of the Defender, and prepare for all-out war! First, the iron pillars descend and a swarm of Afrits will attack. Once they are defeated, four Green Chaos Serpents will teleport in, and side chambers open to unleash a multitude of Dark Bishops (see Bugs section for technicalities). You will find Quartz Flasks useful at this point, or the Icon of the Defender if you are having trouble. If you have got any Kraters of Might, this is an ideal time to use them along with your ultimate weapon. After clearing the serpents and bishops, the wall behind the throne will descend. There will be a Heresiarch, upon a pentagram of lava, ready for a rematch. There are Quartz Flasks on either side to help you through the battle. There are also Wings of Wrath on the western side of the lava pentagram (the lava causes damage). For more information on defeating the Heresiarch, see his entry.

Once the Heresiarch is destroyed, the Icon of Korax will open to reveal a portal to the next hub, Necropolis. In addition, the Axe door will open, but only for six seconds; if you do not exit in time, you will only be able to return to the rest of the hub via use of a Chaos Device.

There is a script on this level running every few seconds which is supposed to check if there are three Green Chaos Serpents left or fewer, and open required passages out of the room behind the Axe door if this condition is met. Instead, it checks if there are exactly three Green Chaos Serpents. Thus, if the player kills two of the four Serpents at the same time, or kills any of them on any of the easier difficulty levels, the level and the hub will become impossible to complete without cheating. Note that this softlock does not occur on the Nintendo 64 port.

To exit the Axe room, simply walk up to the throne. This opens the Axe door for a few seconds.

* The vertex count without the effect of node building is 1299.