Over N Under is a deathmatch map in Hexen: Deathkings of the Dark Citadel. It uses the music track "Fort", or "Winnowing Hall" if using Hexen's audio CD music. 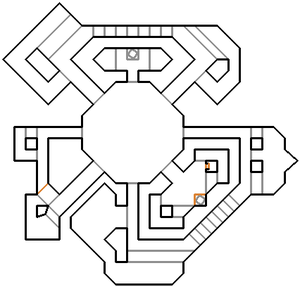 Map of Over N Under

The level is built around a large central pit in which glittering bridge things are placed to create four bridges at different heights connecting opposite sides of the pit and one stairway reaching the lowest bridge. The level is full of fake walls (see-through in one direction, but not in the other) to allow ambushes. The openings on both sides of each bridge are the first seen example of such fake walls: from the pit, they appear as sewer drains.

The bridge thing stairway starts below the opening of the south-east wall and leads to the north wall opening. From there, each opening is connected to its direct opposite by a horizontal bridge.

Along each passage are walls with hanging rings; they are fake walls behind which await useful items as well as enemies lying in ambush.

* The vertex count without the effect of node building is 206.