Sewer Pit is a deathmatch map in Hexen: Deathkings of the Dark Citadel. It uses the music track "Blech". 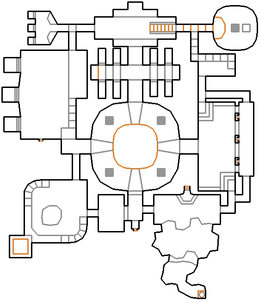 The level is named after the pit in the middle of the central room, deep enough to provoke instant death to anyone who falls in it. A few scripted effects provide additional traps and a renewable source of ultimate weapon pieces. The switch leading back to Transit is in the alcove to the south of the pit.

* The vertex count without the effect of node building is 690.