Dark Crucible is the final level in Hexen. It is where you face Korax himself, along with an army of his minions. Although it is part of the Necropolis hub, you cannot return to any of the other levels once you have entered it.

At last, you now stand poised to battle Korax, the second Serpent Rider. Your fate shall be eternal glory or excruciating death. 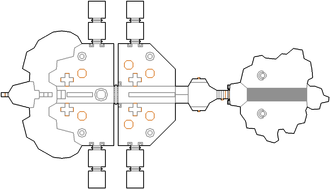 Map of Dark Crucible
Letters in italics refer to marked spots on the map. Sector, thing, and linedef numbers in boldface are secrets.

The player begins on one side of a waving bridge. Cross the bridge (while avoiding falling off to instant death) and open the door. Inside and up some stairs, there are three switches: one to the immediate left, and two on the walls near the door. Begin by pressing both switches nearest to the door, then the switch closer to the entrance. A random type of mana, possibly even a Krater of Might, will appear next to the two switches near the doors. Doing this every sixth time will cause four Dark Bishops to appear. Doing this every 20 time will cause a Mystic Urn to appear in the center of the room. Doing this every 40 times will cause four Slaughtaurs to appear. The player can decide whether or not it is worth it to challenge spawning monsters for additional mana. Open the door when ready to battle Korax.

For suggestions about how to defeat him see the page about him.

Once Korax is dead, a portal will appear at the back of the halls. Enter it and watch the ending sequence.

Congratulations, you win the game.