Menelkir's Tomb is one of three visits you have to make in Hub 5: Necropolis of Hexen. The map is structured like a large ring, with 4 large chambers and 4 small rooms. Inside the ring, Menelkir awaits to do battle. You will have to go around the ring and activate the correct runes to reach him. You will be able to assemble all three segments of the Bloodscourge here if you are the Mage.

Arcane runes chart the way to the arch-mage of the Arcanum, Menelkir, who waits to unleash his sorcerous might upon any who dare confront him. 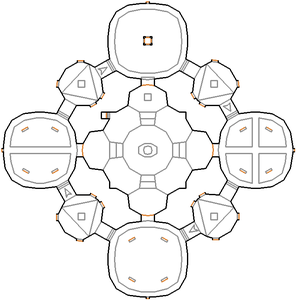 Map of Menelkir's Tomb
Letters in italics refer to marked spots on the map. Sector, thing, and linedef numbers in boldface are secrets.

You will start in a small room, surrounded by runes. There will be several different rune symbols on the wall, and a cube in the middle with the same rune on each side. Select the rune on the wall that matches the cube in order to advance - this is the strategy for all 4 small rooms. In the large chambers, the correct rune switch is indicated by the layout of the room itself. If you select the wrong rune anywhere, monsters will be teleported in, usually four Ettins.

After the first room, you will enter a large icy chamber filled with Stalkers. Defeat them, as well as the Ettins that wander in from the next small room, which will be open. A segment of the Bloodscourge will be in the center of the room if you are the Mage. Be sure to activate the rune that matches the room layout before moving on - you can see this clearly on the map. The correct rune will cause the switches to lower. In the small room ahead, follow the same strategy of selecting the rune on the cube, which will be different this time. This will open the second large chamber, a large pit filled with Dark Bishops. There will be a walkway around the perimeter, as well as a magic bridge leading to the central pillar. There is a Mystic Urn near the start of the bridge. Crossing to the central pillar, you can activate the correct rune, which will stay depressed. The wrong rune will teleport in 3 Dark Bishops. Enter the next small room, defeat its Ettins, and activate the rune to get to the next large chamber - a cavernous room filled with Brown Chaos Serpents. If you are the Mage, the second piece of the Bloodscourge will be in the center. The matching rune will lower the rune switches. After going through the next small room and its Ettins and runes, you'll reach the last large chamber - a stone room filled with lava and Afrits. The Mage will find the final Bloodscourge segment in the center of the lava pool. There are also Dragonskin Bracers here for all classes. Choosing the correct rune lowers the switches.

Now that you have gone around the circle, the rune blocks in the small rooms will be lowered to reveal extra items.

If you activated all the correct runes, there will be new sun/moon switches in each of the large chambers. Pressing any will activate an elevator in the wall opposite the switch. This will bring you to the central area to battle Menelkir, the mage boss.

The central area will be full of items, including Crystal Vials which can be helpful in battle. As you walk around, the raised floor sections will lower, and the central pillar opens to reveal Menelkir descending on a smaller pillar. Once he reaches the ground, the battle is on. He will be armed with his Bloodscourge, firing seeking projectiles that do massive damage. Fortunately, they turn slowly, so it's possible to dodge them. You can also use Discs of Repulsion to deflect them, although this may not work on all three shots at once. An Icon of the Defender will easily get you through the battle.

Once Menelkir has been defeated, you can take the Sigil of the Magus, one of the three relics you'll need to face Korax in the Dark Crucible. A portal will be opened in the central area, allowing you to return to Necropolis.

Four fléchettes (Things 105 through 108) in the southwest have no flags set for any of the three player classes, so they do not actually appear in the single-player and cooperative modes they are tagged for.