Within the halls of the dead, your former masters await you. In the end, you must emerge victorious or all your struggles will have been for naught. 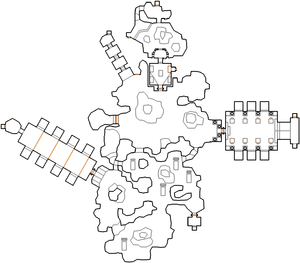 Map of Necropolis
Letters in italics refer to marked spots on the map. Sector, thing, and linedef numbers in boldface are secrets.

As usual, you are greeted by an Icon of Korax. It says, "Are you strong enough to face your own masters?", alluding to the boss fights in the tombs. As you enter the hub, you'll find yourself in a large cemetery full of Reivers, a new and dangerous foe. The map is full of them, with some floating in the air already, and others rising out of the ground as you approach. Your ultimate weapon will come in useful for defeating groups of them. The Reivers come at the player in groups of a specific number, and when all in a particular group is killed off, another wave comes at them with their numbers halved until, eventually, they stop appearing altogether. Despite the challenge, it can be worthwhile to explore the map, as there are many items strewn about.

In this hub, there are three tombs to fight through, a bonus level, and the path to the final battle with Korax. You'll need the three relics - one from each master in his tomb - in order to progress to the Dark Crucible.

The Vivarium is a bonus level with useful items and replenishments. However, you must enter it first - once you have entered any of the tombs, it will be sealed off. Even if you enter the tomb structure without going through the portal, it will be sealed. The Vivarium portal is located at the Southeast corner of the map. To take the most direct path there, first approach Menelkir's Tomb, the eastern pillared structure directly across from the starting point. From there, take the small ascending path on the right, and stick by the eastern/lefthand wall. You will soon see the portal to Vivarium ahead, with two Combined Mana containers in front of it.

The portal to Zedek's Tomb is located in the western adobe structure. The shortest route there involves turning right from the starting point, and sticking by the western/righthand wall - you will see it on your right. Beware of the Reivers on the way. It is important to clear the Reivers outside the tomb before opening the door. Once it is opened, you will face a multitude of centaurs. First there is the crowd in front of you in the hall, but chambers will open on the sides to release even more. Your ultimate weapon will be useful here. There are 8 chambers in total, with two centaurs each, and they open two at a time. You should wait until they all open before rushing in, lest you get surrounded. Even after you defeat the centaurs approaching you, there will be still more that come out of the chambers when you enter. After all are defeated, you can pick up the Platinum Helm and two Combined Mana containers in front of the portal, and proceed.

To get to the Tomb, you must enter the small building to the north - it is to the left of the starting point. Once you clear out the Ettins inside, you will see several raised floor sections. In the far-right corner, there will be one section with a different color - step on it, and it will bring you down to a small chamber with a switch. Activate the switch and ride back up to find an open doorway in the northern wall. Inside, another switch will send the elevator down into a cavern area full of Brown Chaos Serpents. The floor will be rugged, so you have to be careful not to miss any enemies. There is also a raised window section from which the serpents can shoot at you. On the right hand side, there is a passage which has a switch to lower the elevator near the entrance. The passage leads up to the window area, where you will find Boots of Speed and a switch at the far end. After activating it and coming back down, you will see the opened portal on your left. Before you enter Traductus' Tomb, look around for Crystal Vials and Mana if you need them.

This tomb is housed in a pillared structure to the east, located directly across from the starting point. There are several Dark Bishops to greet you on entry. Ahead of you is a large wooden door - try to open it, and it will close again, with the message that the "portal has been sealed". Eight bullhead switches will rise in front of each pillar, and you will be asked to "choose your fate". Six of these switches open one chamber each with two Dark Bishops and a pair of Crystal Vials. Each switch has a random effect, determined once pulled. One switch releases four Dark Bishops, one from each corner of the room. One switch will open the large wooden doors, allowing you to proceed. There will be a few more Dark Bishops, two Combined Mana containers, and a Krater of Might. On the left is the portal to Menelkir's Tomb.

Once you have completed the tombs and gathered the three relics, you may go on to the final battle. Turn left from the starting point to find a structure at the northwest corner with a stone door. On the right side will be a panel in which you place the three relics - the Sigil of the Magus, the Holy Relic, and the Glaive Seal. Having done so, three chambers will open up ahead. Each one contains a monster of a certain type, depending on your character class. The Fighter will face Slaughtaurs, the Cleric will fight Dark Bishops, and the Mage will battle Green Chaos Serpents. The first two chambers have two Combined Mana containers each, with three Combined Mana containers in the third. At the end is the portal to the epilogue, the Dark Crucible. Once you have passed through, there is no turning back.

Not technically a game affecting bug as Hexen never displays a kill percentage: there are three dormant Reivers on the map that are never activated.

If you manage to save just as lightning strikes, then reload, the level will be stuck as permanently brighter, greatly improving visibility. (Tested in the DOS game version 1.1)