Vivarium is a bonus secret level in Hub 5: Necropolis in Hexen.

Valuable items in the struggle for life are available to those whose aim is true, but once you move on, there is no turning back. 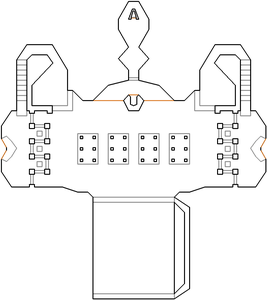 Map of Vivarium
Letters in italics refer to marked spots on the map. Sector, thing, and linedef numbers in boldface are secrets.

This level is optional, but it will provide lots of helpful items for the final hub. As the intro suggests, the entrance portal is only available before you enter any of the tombs, after which it is closed off.

Upon entry, you will be surrounded by lots of monsters. It is recommended that you use your ultimate weapon to clear them out, especially on higher difficulties. You will find yourself in a large room with four large raised platforms, each with a crushing ceiling slowly raising and lowering. On these platforms will be combined mana containers which will refill much of your mana. The crushing ceiling is slow, so you can collect them easily as long as you're careful.

At the opposite side of the large room will be a central ledge, and two square-shaped corner ledges which each have a useful item. To get to the raised corner areas, you will have to go through the side chambers. At the sides of the main room are enclosures, in which two horned skull panels will be spitting random projectiles around the room, including porkalator shots. Make sure to watch out for the spike traps around the walls which come out of square sections of dirt. Entering from the side of the enclosure, make your way to the stained-glass window. As you push against it, it will rotate and allow you to pass. Fight your way through the monsters in the stairwell until you come to the raised corner section. Here you will find Ettins, unless you killed them earlier, and one good item - a Mystic Urn on one corner, and Dragonskin Bracers on the other. The strategy is the same for both sides.

To get to the main raised area up front, there are two ways. You can shoot your weapon at the wall (except the center section), and it will come down as an elevator. Or you can jump on the demon statues to climb up. Once there, go to the center and you will see a minotaur statue facing the wall. Move towards it, and it will light up, opening the entrance behind you. Fight the monsters there and you will have access to the exit portal which will take you back to Necropolis. However, there is another important stop to make here first.

Going back across the room to the side where you started, you will notice a small opening that is on the left-hand side when facing the wall. It is too small to fit through. However, if you go to the shooting skull panels, you can intentionally get hit by a porkalator shot (it is round and flesh colored). As a pig, you will be able to go through the small tunnel. At the other end, you will find yourself in a large room free of enemies and filled with tons of items. Once your pig status wears off, you can collect them - health, fléchettes, mana, as well as a full set of armor boosts (Platinum Helm, Falcon Shield, Mesh Armor, Amulet of Warding). Once you're finished, open the far wall from where you entered. In version 1.1, the wall opens by pressing use on it, but in version 1.0 and the Nintendo 64 port you need to use an attack to open the wall. When the wall opens, stand back to avoid crushing, as it widely swings inward.

Now you've done everything. Simply make your way back to the central raised area and to the exit portal. Before you go, be sure to pick up the Porkalator artifact hidden behind the portal.

Depending on which character class you play as, different enemies appear in the level. As the Fighter, there will be centaurs, slaughtaurs, and green chaos serpents. As the Cleric, you will face dark bishops, brown chaos serpents, and ettins. As the Mage, there will be reivers, afrits, and notably wendigos, who otherwise only appear in the first hub. While there are always ettins present, there are more for the Cleric.