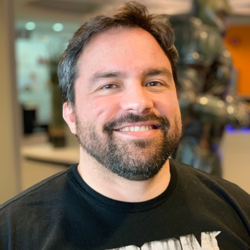 Hugo Martin is Game Director at id Software since 2018 [1], after having been Creative Director from 2014, having freelanced for the company before being hired full-time,[2] with his first major project there being Doom (2016). His industry experience began in 2005 with art design work on Naughty Dog's Jak X: Combat Racing.[3] He has also worked at Blur Studio, Mirada, and Spark Unlimited in the fields of games, commercials, and film.[3] He played a notable role in the creation of the 2013 film Pacific Rim.[4]

As a self-described pop culture nerd, Hugo infused elements from diverse films, comics, and other artistic works into his vision for the 2016 Doom game. He also calls himself a fan of lean, efficient story telling.[2]