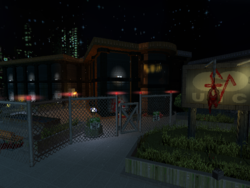 An example screenshot of the animated titlemap.

I.H.N.I. is a four-level PK3 for Doom II, created by Kraja for the GZDoom source port. Containing an entirely revamped arsenal, new custom enemies and props, and many custom textures, it was initially released on November 18, 2020, and saw several updates in the following years. The latest is version 1.04 released in February 2022, containing all the maps from episode 1 plus a bonus map from the still-in-the-works second episode.