IC2005 is a single-level PWAD created by Ian Cunnings (The Flange Peddler). It was released in 2005 and uses a MIDI rendition of "Descent Into Cerberon" from the Quake II soundtrack, sequenced by Jay Reichard (silentzorah), as its music track.

The map received one of the 13th Annual Cacowards. 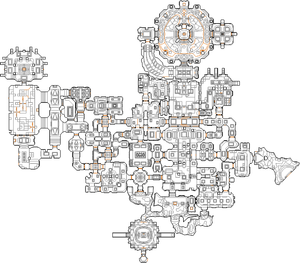 Map of IC2005
Letters in italics refer to marked spots on the map. Sector, thing, and linedef numbers in boldface are secrets which count toward the end-of-level tally.

* The vertex count without the effect of node building is 15208.