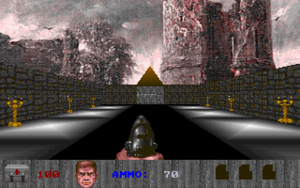 The opening level of IDKFA.

IDKFA is a fan made game by Aleksander Trojanowski, that heavily features Doom assets with original level design and a custom engine, based on QuickBASIC.

IDKFA was the first shooter Trojanowski undertook after releasing a clone of Arkanoid in January 2001. The game is relatively short and includes four levels. Enemies from Doom are ripped and used, along with the face and various other sprites and textures. The final release version was 2.1, dated June 2001.

After finishing up IDKFA, Trojanowski started a more ambitious project. This was to be called ATTE.

Aleksander Trojanowski's first released 3D engine, The IDKFA engine is a true 3D polygonal engine enabling features like a sky and static light sources, but lacks floor or ceiling textures, giving the game a similar look to raycasters like Wolfenstein 3D. It makes use of several libraries in assembly language, namely DirectQB and Dash, which are used as modules in QuickBASIC to provide a 320x200 VGA screen with 256 colors. They are also used to help speed up rendering as well as providing sound functionality.

Because of its underlying QuickBASIC codebase and inclusion of several routines in assembly, the game carries a significant performance deficit requiring a rather fast computer to function properly in DOS, far beyond what usual titles on this platform require. The engine is also capped at 30 FPS. The following requirements are taken from the IDKFA readme:

It is about playable in DOSBox with increased CPU cycles.

The IDKFA engine source code is provided with the released binary and may be used in other titles. However, the author demands that he is credited through the following text:

His e-mail address can be found on his homepage (found below) and has remained the same for nearly two decades.