IDKFA - Knee-Deep in the Dead 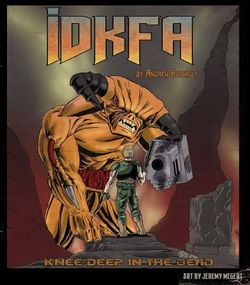 IDKFA - Knee-Deep in the Dead

IDKFA - Knee-Deep in the Dead is professional musician Andrew Hulshult's high-quality remake of the original Doom soundtrack composed by Robert Prince. Hulshult rearranged all of the songs, played them with real instruments, and recorded in a professional studio.

In addition to high-quality MP3, OGG, and FLAC files of each song, Hulshult compiled the OGG versions as a music pack that can be used when playing the game or watching demos. (The "Intro" track is only present in the music pack.)

Released in 2016, IDKFA was popular from the start, in large part because Marcos Abenante (Sergeant Mark IV) endorsed it as the "official soundtrack" of his popular Brutal Doom mod. As of early 2022, the version Hulshult published on his YouTube channel has over 1.6 million views.