Icarus: Alien Vanguard (ICARUS.WAD) is a 32-level megawad released on March 21, 1996 by TeamTNT. It was developed as the collective's first freeware release, after TNT: Evilution was picked up for publishing by id Software for what would become Final Doom. The first level sees the player commandeering a shuttle and flying it to the infested exploration cruiser, the Icarus. From there, the player must fight through the ship, regions of the neighboring planet, and unsafe simulations to cleanse the demonic threat. A sequel, Daedalus: Alien Defense, was released in 2003.

The megawad's soundtrack was composed by a team called MusIcarus, consisting of the following: Brian Kidby (coordinator), Jeremy Doyle, Jonathan El-Bizri, Charles Li, David Shaw and Tom Mustaine. Many tracks feature a distinct leitmotif, based on the text screen music in the WAD. 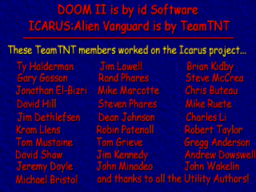 The story of Icarus: Alien Vanguard was written by Brian Kidby, and is available only on the official TeamTNT website for the WAD[1]. Like official Doom story materials, it is written in the second person.

The story takes place twelve years1 after the events of Doom II, characterized as "total global war" between humanity and an invading race that "attacked with a fury that seemed the spawn of Hell itself". After the human race evacuated Earth, it was decided to bomb the entry points of the invasion from space. Following this, "special military teams" were sent to take out the surviving forces. Nearly a year later, the human race returned to their now devastated planet and began to rebuild, amidst occasional but ongoing battle with the remnants of the enemy.

In the wake of the invasion, the newly arisen United Nations established the Earth Defense Council (EDC), which would protect the planet from future invasions. Fulfilling this is the Earth Defense Force (EDF), their active arm, consisting of every military force in the world, which also explores nearby planetary systems for life forms hostile or not.

The exploration has been going on for one year prior to the beginning of the story via short-range cruisers, equipped with Personnel Transport (PT) systems developed by the UAC for direct travel between ships and planets. Two have reached their destinations and have sent back preliminary scans suggesting no signs of intelligent life, with more data expected as the exploration teams are planned to do surface scans soon.

When the story begins, Doom's protagonist is woken up at 2:00 AM by a call from his commander, General Bill Robinson, for an emergency, which sends him on a flight to the Northern United States EDF base near Billings, Montana. There, he receives the news: it seems the EDF has lost contact with the Icarus, the last exploration cruiser to be launched, headed for the Beta Pictoris system. It was exploring and scanning the five planets2 of Beta Pictoris as planned when, according to its logs1, scanners detected intelligent life on the third. Analysis revealed Beta Pictoris 3 to have Earth-like conditions, and a recon team was sent to the surface. Unfortunately, the team encountered hostile life forms six hours after landing, resulting in an almost half-hour firefight in which the hostiles were apparently killed along with several members of the recon team. The bodies were brought in for analysis by the Science branch of the Icarus. The last log entry, around five hours later, reveals the hostiles were playing dead, and subsequently took over the ship using the PT systems to increase their numbers. The entire crew of the Icarus was seemingly killed.

Asked by the protagonist when he is scheduled for takeoff, the General informs him that the EDF has nothing capable of reaching the Icarus or Beta Pictoris 3. What it does have is the location of a storage depot in Florida once owned by the IRS, which included a fully functional "hyper-shuttle" among other spacecraft and armaments. However, it was overrun by the invasion forces early in the conflict, and EDF has not taken it back since. One soldier (or a small team) is to sneak into the depot, reclaim the shuttle, fly it to the Icarus and eliminate all hostiles aboard. The protagonist is the one assigned to this mission, which he accepts gladly. He has a "jump-jet" prepared for him, scheduled to launch at 11:00 AM.

Before dismissing him, however, the General informs the protagonist of two things. Firstly, the shuttle only has enough fuel to make it to the Icarus and not the return trip, unless the protagonist can refuel from the Icarus. Secondly, the Icarus must be returned with none of the hostiles alive. If it appears this is impossible, the protagonist is to activate the self-destruct and escape.

With both of those points understood, the protagonist leaves to prepare for takeoff.

1. ^  The Icarus log entries are dated to 2024, suggesting that the events of Doom II took place in 2012.
2. ^  In real life (as of this writing), the Beta Pictoris system has only two confirmed planets, Beta Pictoris b and Beta Pictoris c. 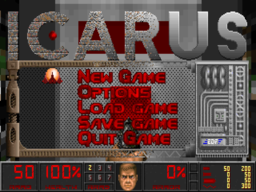 The main menu brought up at the beginning of MAP01: Shuttlecraft, showing the megawad's custom menu design and status bar.

Each level ends the same way, with a barrier that requires a red key to open and a sign stating where the next level will take place. The locations of each level are given in parentheses.

The WAD's soundtrack replaces every song in Doom II and is wholly original apart from an arrangement of classical music on MAP22: Nightfall. Not every song's title is known. The complete credits for the soundtrack were revealed by composer Jeremy Doyle in February 2018 in a YouTube comment on Xeotroid's "Icarus: Alien Vanguard COMPLETE MUSIC COVER v2" video, though even he is unsure who created the intermission screen music.

This WAD features a full set of built-in demos. All three end with the player's death, and DEMO3 shows how to fight the ghost monsters in MAP24: The Haunting (i.e. the player must use the rocket launcher's splash damage to hurt them). It is not known who in TeamTNT recorded them. All demos require Doom II v1.9 for viewing. The demo levels are:

The DSDA episode records for Icarus: Alien Vanguard are: