This article is about the entity in Doom (2016). For other games, see: 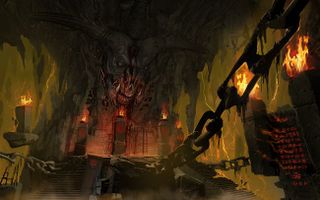 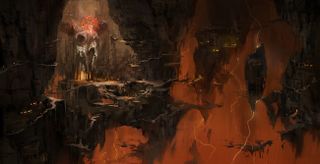 The Icon of Sin is a dormant demonic entity in Doom (2016) found within the depths of the Necropolis in Hell. The lore left by the demons seems to describe it as a weapon of infernal mass destruction which is "brought upon the heathens" of other worlds after their defenses have fallen to the forces of Hell, with "swift and merciless" vengeance. The last known reference to its use occurs in the Ungmar Codex, where its role in the final fall of Argent D'Nur is briefly detailed. The UAC encountered the Icon of Sin while exploring the Necropolis, and implored its advocates to "imagine yourself worshipping before the Icon of Sin, in awe of its splendor even as it sleeps till the Call of Ages comes."

Concept artist Emerson Tung initially designed the demonic edifice as a generic homage to the final boss of Doom II and placed it within the Necropolis as a set piece. It was retained throughout development and eventually canonized by the developers as being the Icon of Sin itself.[1] 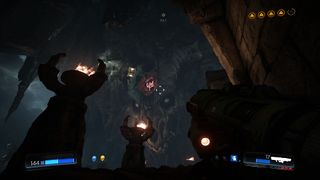 The Icon of Sin fires a spawn cube.

If a projectile is fired into the hole in the demon's forehead where the demonic rune appears, it will be provoked into firing a spawn cube, using the same effects as those from Doom II. Upon landing, this spawn cube will summon one of the level's secret items.

The Icon of Sin returns in Doom Eternal as the final boss. It is confirmed in the game that the Icon of Sin was originally created using the heart of the Betrayer's son, as Hell's twisted way of honoring its bargain to return him to life.

Angered after the death of the Hell priests, the Khan Maykr resorts to resurrecting the Icon of Sin to consume Earth. It is invulnerable to conventional weapons, and can only be defeated with a crucible. Once arriving at Urdak, the Doom Slayer destroys the heart of the Betrayer's son, causing the Khan Maykr to lose all control over the beast. The Icon teleports to Earth, and with no inhibitions enforced by the Khan Maykr, it will ultimately grow in strength until the universe has been absorbed by Hell. The Doom Slayer must first strip away the Icon's Maykr armor in the first fight, then will repeat the process with its flesh. Fortunately, the Slayer is able to put a stop to the Icon of Sin by jamming the Crucible into its brain, killing it once and for all.

With the Icon of Sin defeated, Hell's armies depart from Earth, leaving the planet clear of demonic infestation.