Icon of the Defender 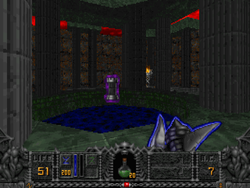 The Icon of the Defender as seen in Hub 1: Bright Crucible.

The Icon of the Defender is an artifact from Hexen. It has the shape of a miniature gray castle tower, similar to the rook in chess, with a purple aura. It grants almost total invulnerability to all classes; however, the precise effect differs for each character:

The effect lasts for 30 seconds.

Instant death effects such as telefragging or falling damage from great heights (2047+ units of uninterrupted freefall) will still kill a player using the icon.

In the IWADs the icon of the defender is first encountered on these maps per skill level:

The IWADs contain the following numbers of icons of the defender per skill level: