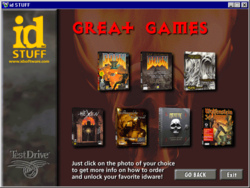 The id STUFF digital catalog from the Quake CD. 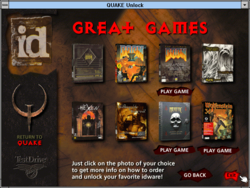 The id STUFF digital catalog from a Quake Shareware v1.01 CD. Clicking on "Play Game" allows the user to install the shareware version of a game.

id STUFF was a digital catalog included on the CDs of several id Software releases, including the Master Levels, Heretic: Shadow of the Serpent Riders, Deathkings of the Dark Citadel and Quake. Players could phone in to order a decryption code for commercial games stored on the CD, which could then be unlocked via the id STUFF interface. The catalog also advertised physical merchandise such as T-shirts and strategy guides. Mousing over a particular item on the display would cause additional information to appear, such as system requirements for games or a back view of the shirts.

The software ran as a 16-bit Windows application. Each version was specific to the release it was installed from and would not properly display the offerings from a different CD containing an id STUFF directory.

id STUFF on the Heretic SotSR and Deathkings CDs offered:

id STUFF on the Quake CD had the following selection:

id STUFF on the Quake Shareware v1.01 CD had the largest selection: